6 September 2013
The Joint Special Representative of the United Nations and the League of Arab States today stressed that he and other senior diplomats were working “extremely hard” bring Syrian an other concerned parties together for a conference to find a political path out of the crisis in the country.

Following a meeting initiated by Russian Foreign Minister Sergey Lavrov on the sidelines of the G20 summit in St. Petersburg, Lakhdar Brahimi said the UN has been working hard to prepare for the so-called Geneva II meeting, which would include representatives of Syrian parties as well as senior United States, Russian and UN officials.

The goal of the conference would to be to achieve a political solution to the conflict in Syria through a comprehensive agreement between the Government and the opposition for the full implementation of the Geneva communiqué of 30 June 2012.

Yet, he said, the fate of the conference was “in danger” because of the alleged use of chemical weapons on the outskirts of Damascus, the Syrian capital, on 21 August, “and what may follow as a consequence of that.”

“I have drawn attention to the participants of this meeting today to the possible consequences…I think the United Nations [has no] alternative but too continue to pay close attention to the situation in Syria,” Mr. Brahimi said.

The biomedical and environmental samples taken by the UN chemical weapons inspection team from the alleged 21 August attack in the Ghouta area outside Damascus are currently being analyzed in four European laboratories. Scientists are working “around the clock” to ensure a rapid result but one that also respects the highest professional standards and without compromising its integrity.

Mr. Ban had asked Mr. Brahimi to join him in Russia to push for a political solution to the Syrian conflict.

Addressing world leaders at a working dinner last night, Mr. Ban urged the leaders of the Permanent Five members of the Security Council – China, France, Russia, United Kingdom and United States – as well as from some of the Council’s non-permanent members to “discharge their responsibility fully and for the sake of the people of Syria.” 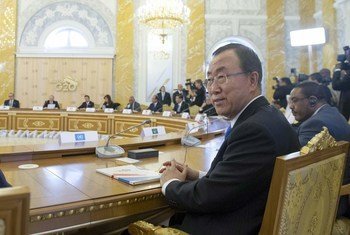 5 September 2013
With the world focused on the possible use of chemical weapons in Syria, Secretary-General Ban Ki-moon and the joint United Nations-Arab League Envoy, Lakhdar Brahimi, reiterated to leaders attending the Group of 20 (G20) summit in St. Petersburg the need to “push even harder” for a political solution to end the bloodshed in the war-torn Middle Eastern country.