6 September 2013
The United Nations humanitarian chief today reiterated the Organization’s commitment to continue its relief operations inside Syria, as well as in neighbouring countries, adding that protecting civilians is paramount amid the spiralling violence.

“Syria and its neighbouring countries are going through a humanitarian crisis on a scale we have rarely seen,” Under-Secretary-General for Humanitarian Affairs and Emergency Relief Coordinator Valerie Amos told reporters in New York in a teleconference from Beirut, Lebanon.

“The fighting is having a terrible impact on ordinary people. Neighbourhoods have been shelled indiscriminately and entire towns have been besieged.”

Ms. Amos, who is just back from a visit to Syria, stressed that despite the “very difficult and dangerous conditions,” humanitarian aid organizations are committed to continuing their work. The UN currently has some 4,500 staff in Syria working with non-governmental and community organizations to help people who need it the most in both Government and opposition-controlled areas.

“Inside Syria, protecting civilians is paramount. The rise in the level of sectarian and sexual violence and ongoing human rights abuses are a major concern,” Ms. Amos said.

More than one third of Syrians urgently need humanitarian aid but the crisis is affecting everyone, she said, as the currency has significantly depreciated and essential infrastructure has been destroyed, including health facilities.

During her visit, Ms. Amos met with members of the Government and humanitarian partners, with whom she discussed ways to improve aid operations.

“I had positive meetings with the Government and hope we will make progress in addressing some of the administrative challenges we have faced in getting approval for field operations, convoys and visas for humanitarian aid workers,” she said.

Since fighting began in March 2011 between the Syrian Government and opposition groups seeking to oust President Bashar Al-Assad as many as 100,000 people have been killed, more than 2 million have fled to neighbouring countries and a further 4 million have been internally displaced. In addition, at least 6.8 million Syrian require urgent humanitarian assistance, half of whom are children.

Ms. Amos added that the refugee crisis is having a very damaging effect on the economy on the social structure of host communities and as the number of people fleeing the country continues to escalate, she urged the international community to boost their support for the refugee appeal. 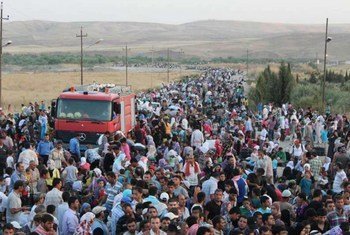 3 September 2013
With an estimated 5,000 desperate Syrians fleeing their homes every day, the spiralling violence in the country has now created more than 2 million refugees, the United Nations refugee agency announced today, adding that there is no sign the “humanitarian calamity” will end anytime soon.