5 September 2013
With the world focused on the possible use of chemical weapons in Syria, Secretary-General Ban Ki-moon and the joint United Nations-Arab League Envoy, Lakhdar Brahimi, reiterated to leaders attending the Group of 20 (G20) summit in St. Petersburg the need to “push even harder” for a political solution to end the bloodshed in the war-torn Middle Eastern country.

With the world focused on the possible use of chemical weapons in Syria, Secretary-General Ban Ki-moon and the joint United Nations-Arab League Envoy, Lakhdar Brahimi, reiterated to leaders attending the Group of 20 (G20) summit in St. Petersburg the need to “push even harder” for a political solution to end the bloodshed in the war-torn Middle Eastern country.

Addressing world leaders at a working dinner, Mr. Ban urged the leaders of the Permanent Five members of the Security Council – China, France, Russia, United Kingdom and United States – as well as from some of the Council's non-permanent members to “discharge their responsibility fully and for the sake of the people of Syria.”

He also reminded the Council members that they have a “collective responsibility to mankind” to act, but reiterated that as they debate courses of action, any decision “should be taken within the framework of the UN Charter, as a matter of principle.”

Highlighting the human toll of the conflict, Mr. Ban reiterated that more than 100,000 people have died, 4.25 million people have been displaced within the country, and at least another two million are now refugees.

He urgently asked the leaders gathered to fill the nearly $4.4 billion gap for humanitarian and refugee efforts in Syria and neighbouring countries – particularly Iraq, Jordan, Lebanon and Turkey – as well as in North African. All of which had been “generous in hosting Syrian refugees.”

Mr. Brahimi, the Joint Special Representative of the UN and the League of Arab States for Syrian, arrived in the Russian city earlier today at Mr. Ban's request.

The UN chief said that he had asked Mr. Brahimi to join him in St. Petersburg to press for the early convening of an international meeting on Syria to be held in Geneva with participation of senior Russian, United States and UN officials.

Mr. Brahimi said that the Syrian crisis had reached such an “urgent” stage that the Secretary-General thought it might be one of the questions to be addressed either by the G20 itself or on the margins of the summit.

“I'm sure it would be taken up in all the meetings the Secretary-General is going to have,” Mr. Brahimi told UNTV, adding that Russian Foreign Minister Sergei Lavrov might organize a special meeting on Syria.

Meanwhile, the biomedical and environmental samples collected by Swedish scientist Dr. Åke Sellström and his team at sites in Syria where chemical weapons were allegedly used on 21 August, have now arrived at four laboratories in Europe for analyses.

Mr. Ban said scientists are working “around the clock” to ensure a rapid result but one that also respects the highest professional standards and without compromising its integrity.

Once results are available, Mr. Ban noted that he would report them “promptly” to the Security Council and all 193 UN Member States.

Earlier today, Mr. Ban met on its sidelines with the President of the Republic of Korea, Park Geun-hye. In addition to discussing developments in Syria, Mr. Ban and Ms. Park discussed the Korean peninsula, in specific, ROK's proposed world peace park in the Demilitarized Zone.

Mr. Ban also thanked Ms. Park for the country's $6 million contribution to the UN World Health Organization (WHO) to assist children in the Democratic People's Republic of Korea (DPRK).

In a meeting with the President of Kazakhstan, Nursultan Nazarbayev, Mr. Ban commended Kazakhstan's long-standing constructive cooperation with the UN and the role it plays internationally in the context of nuclear non-proliferation and religious tolerance.

He and President Nazarbayev also discussed the situation in Syria, as well as the important roles played by the Organization, as well as Afghanistan and regional cooperation, on water management.

They discussed a number of the recommendations that arose from the most recent Universal Periodic Review, notably relating to the role of civil society, and the rights of people with disabilities and of the lesbian, gay, bi-sexual and transgender (LGBT) community.

The Geneva-based Council's Universal Periodic Review subjects each country's human rights record to a State-led peer review on the basis of information submitted by the country concerned, UN entities, civil society and other stakeholders.

The Secretary-General encouraged the Ombudsman, together with the Russian authorities, to implement all recommendations.

Mr. Ban is at the G20 to also focus international attention on long-term global challenges, including the achievement of the eight anti-poverty targets known as the Millennium Development Goals (MDGs), strengthening global economic recovery, and achieving a sustainable future.

“Putting off those challenges until tomorrow will only make them even more difficult and expensive to solve,” Mr. Ban said yesterday remarks at St. Petersburg State University.

The MDGs will be a focus at the high-level gathering of the General Assembly later this month at the UN Headquarters in New York.

Mr. Ban is expected to speak about the MDGs and the post-2015 sustainable development tomorrow in remarks to the G20. 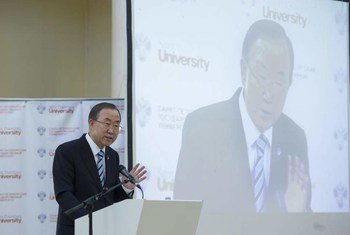 4 September 2013
Secretary-General Ban Ki-moon today emphasized the need for global cooperation, particularly towards accelerating progress on agreed goals in education, poverty eradication and sustainable development, as leaders of the Group of 20 (G20) prepare to meet in the Russian city of St. Petersburg to discuss pressing global issues.