30 August 2013
The United Nations is educating students on how things are actually done inside its chambers by launching a new UN guide for Model UN, the first time the Organization has tried to change the direction in which the role-playing diplomatic simulations have evolved.

“Through our interactions with Model UN conferences around the world, we have learned that most traditional Model UNs do not mirror the way the United Nations actually functions. MUN simulations use different rules of procedure and do not typically adopt resolutions by consensus that is now the common trend at the UN,” said Maher Nasser, Director of Outreach in the UN Department of Public Information.

In an effort to educate organizers of Model UN (MUN) about the differences, the Organization created the “UN Guide for MUN” and has been introducing it in UN workshops, like the one held this week for 80 participants from 36 countries at the New York headquarters.

In a Model UN, students take on the roles of ambassadors in simulated sessions of the General Assembly or Security Council, and research and debate a wide range of topics drawn from the UN’s agenda.

In that respect, MUN and the United Nations not so far apart; the differences really start to emerge in the details of how the discussions take place.

“There is a huge gap between how the Model and the UN actually work. We work with parliamentary caucus style and the UN does not. So there are a million points of order that you do at Model UN that do not happen in the real UN,” said workshop participant Aura Maria Gualdron.

A 15-year veteran of MUNs, Ms. Gualdron is working with the local government and the UN Information Centre (UNIC) in her native Colombia to organize a simulation that will include the ongoing peace process negotiations. Scheduled for next year, the Simulación del Modelo de las Naciones Unidas (SimONU) will include abut 1,600 first-time MUN student delegates from private and public schools.

Since the 1940s, Model UN conferences have been held around the world. Some schools use Model UN as part of their curricula, others support their students in planning conferences as leadership opportunities.

In Azerbaijan, preparations are now underway for an October 21-25 session of Model UN Security Council organized in cooperation with the Ministry of Youth and Sport. The timing coincides with the rotating presidency of Azerbaijan at the real Security Council in New York, and will include young representatives from the same 15 countries that currently make up the Council.

“We want to use the momentum to showcase to the world the membership of Azerbaijan,” said Vugar Allahverdiyev, Programme Adviser at UN Development Programme (UNDP) in that country.

Mr. Allahverdiyev has been working with the Department of Public Information to align the simulation that is being organized in Azerbaijan with practices at the UN, one of the reasons he is at the workshop, as well as to get the word out about the debate.

“This is a good networking opportunity. It is also a good opportunity for us to share different experiences and discuss what different countries are doing,” he added.

Over the course of the four days, participants also heard from a variety of UN officials. An informal survey showed that students most enjoyed hearing from Deputy Secretary-General Jan Eliasson, who detailed the UN priorities to the students but also gave them a bit of a pep talk, and Stadler Trengove, Senior Legal Officer at the UN Office of Legal Affairs, who detailed the rules dealing with how representatives are accredited and how disputes regarding representation are resolved, among other topics.

“In my presentation, I gave a couple of illustrations to the Workshop of how the rules of procedure come alive in the cut and thrust of General Assembly debate,” Mr. Trengove said. “I also discussed how the General Assembly and Security Council play different but equally important roles in the work of the Organization.”

One of the participants also enjoyed hearing about budget and the financial dimensions of the UN.

“At Model UN kids usually say - we’re going to create a program for this or a program for that. It could be interesting to have an option to make them aware of the fact that they do have to take into account the financial elements,” said Ms. Gualdron.

During a break between workshop sessions, Anastasia Trubnikova, a 23-year-old Russian studying in Germany, stood with 19-year-old Finn Carlson from Leiden University in The Hague. Secretary-General Ban Ki-moon, a former MUN member himself, had spoken this week at Leiden during an official visit to the Netherlands.

“I’d like to think that we swapped roles,” Mr. Carlson joked. “My friends went and there are photos on Facebook. I cannot believe I missed it.”

Ms. Trubnikova is organizing MUN conferences in Denmark and Germany; Mr. Carlson has taken part in 14 such conferences. Both share long-term diplomatic aspirations.

“It has been a big dream for a while now. You hear often it’s hard to get here, but you might as well try,” said Mr. Carlson. “It’s pretty awesome to be here. Sad the workshop is over.” 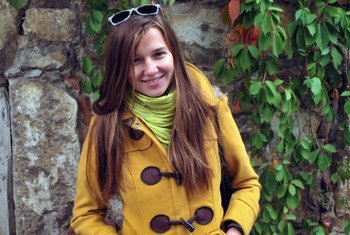 11 April 2013
They are gifted storytellers who are using stunning visual imagery and powerful narratives to raise awareness of the challenges affecting forests and those who dwell within them, as well as to spur action to protect this vital resource. They are international award winners. And, they are all under the age of 30.