Olga Lavrushko
Olga Lavrushko, a 21-year-old engineering student from the Ukraine and winner of the first ever UN International Forest Photograph Award.

11 April 2013
They are gifted storytellers who are using stunning visual imagery and powerful narratives to raise awareness of the challenges affecting forests and those who dwell within them, as well as to spur action to protect this vital resource. They are international award winners. And, they are all under the age of 30.

Elio Alonso Vasquez is just one month shy of finishing high school. The 19-year-old grew up in one of Latin American’s most vibrant cities, Arequipa, Peru, which is inscribed on the World Heritage List of the UN Educational, Scientific and Cultural Organization (UNESCO).

Currently a student in Norway, Alonso is one of the youngest recipients of awards handed out this week in Istanbul during the tenth session of the UN Forum on Forests (UNFF10). His film, entitled “Feel Like a Mountain,” tells the story of how he came to appreciate the qualities of the forests, and in particular how important they are to the indigenous peoples in Peru.

“The aim of this film was to encourage young people back home to think about this issue, to react and to do something,” said Alonso, who admitted to never even liking documentaries before making the film. “I hated documentaries. I thought they were really, really boring,” he told the UN News Centre.

It wasn’t until he moved to Norway that Alonso – who went from living in a city of nine million to a small village of several hundred – visited a forest for the first time. It was from there that he drew his inspiration.

“After being near the forest, I looked back and thought about all the years that I lived in Peru and I didn’t care about the forest,” he said. “And I see that there’s a lot of indigenous people that are not protected and a lot of young people that just don’t care.”

The film recalls a June 2009 incident during which a protest by indigenous people in the Bagua area of the Amazon against the exploitation of natural resources on their traditional lands was broken up by police and ended in the deaths of 33 people.

He wants to use his film to reach people, especially young people, and to get them to think about nature, and about forests in particular.

“This, for me, is just the starting point. I know that this award will give me a big platform to address my generation back in Peru,” he said. “That’s what I really want. That’s what I had in mind when I made the film.”

“We haven’t really been in touch with forests and nature,” he added. “I feel that if you’re not familiar with something, you’re not going to be willing to protect it.”

Sébastien Pins, 22, has been fascinated by the mysteries of nature from a very young age, thanks to the influence of his mother. A native of Belgium, the university student has already received many prizes throughout Europe. At the age of eight, he wrote and directed his first theatre scene, and at 20, became a professional pyrotechnician.

His award-winning and visually stunning film, “Ma Forêt” (My Forest), depicts a toddler’s foray into the forest and his utter fascination at all that he finds there.

“My goal in making the film was to touch a lot of people by using the symbol of the child to convince people of the importance of forests,” said Sébastien. “Many young people are not very concerned with forests.

“If I can’t convince them by speaking to them, then I will try by making movies with strong messages,” he stated, adding that cinema can be a powerful way to influence people.

Engineering student Olga Lavrushko did not even own a digital camera. But that did not stop the 21-year-old from Ukraine from entering the Forum’s first ever International Forest Photograph Contest with a photo taken on an old film camera produced in the former Soviet Union in the 1970s.

“I was really surprised when I got the congratulations letter because I can’t call myself a photographer,” she said. An explorer at heart, Olga shot her winning photo at a forest near her town, where she likes to explore on her bike.

Another winner of the photo contest, Prasetyo Nurramdhan of Indonesia, is also 21. A self-taught photographer, he was first attracted to photography in high school. He is currently studying information technology, and also writes on teenage issues for an Indonesian newspaper called Compass.

The UN Secretary-General has made working with youth one of his top priorities, and earlier this year appointed the first ever Youth Envoy to address the needs of the largest generation of youth the world has ever known.

Youth are also among the nine “major groups” participating in the Forum’s session. Tolulope Daramola, of the International Forestry Students’ Association and coordinator of the youth major group, stressed that young people are vital to addressing the issue of forests and their sustainable management.

“A true understanding of the value of forests and its contribution toward sustainable development can only be achieved when the social and cultural values are linked to environment and economic values, and recognizing the position of young people as major partners and not just as ordinary stakeholders is very essential in this case.”

He called on the Forum to create youth forest ambassadors in each region, and encouraged Member States to support talented students in becoming highly qualified forestry professionals, as well as the development of global youth initiatives to empower young people in sustainable forestry management.

Paul Rosolie of the United States, 25, knows very well the power of young people to initiate action on environmental issues. He became interested in forests as a young boy living in New Jersey, but found that he did not have access to many forests where he was.

“I was very curious and anxious to get out into the world, so when I was 18 I traveled to my dream spot – the western Amazon in Peru – and from there got instantly wrapped up in the struggle of the local community to protect their forest,” he said.

Working with indigenous communities to protect forests through responsible ecotourism, Paul spent over seven years with people who know the forest best. Though he specializes in the western Amazon, his work has also taken him to Borneo, India and Brazil.

Paul’s current focus is storytelling, and one juror for the UN short film contest described his piece on Amazonian wildlife, entitled “An Unseen World,” as “nature filmmaking at its most raw and innovative.”

“There are a lot of people who don’t know what’s going on, but there’s also a lot of people… and maybe it’s because of the circles I travel in, but I feel that my generation is incredibly aware of what’s going and they actually care a lot,” said Paul.

He firmly believes that this is a very crucial moment in history for the Amazon, and that his generation has a responsibility to ensure its survival. “The world cannot exist without the Amazon. We really need everybody to be concentrating on this… it needs to be done.

Poorer countries may find it harder than ever to foster industrialization, UN warns 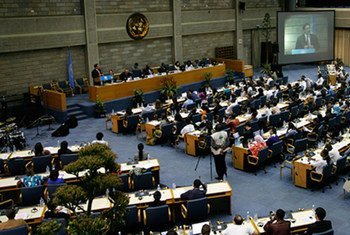 11 February 2013
Some 250 youth delegates from over 100 countries will examine ways in which young people can directly tackle today’s most pressing environmental issues at a United Nations conference that kicked off in Nairobi, Kenya.