20 August 2013
The top United Nations peacekeeping official in Liberia has congratulated the people and Government of the country on more than a decade of sustainable peace and urged them to participate in public life to prevent a return to the “dark days of the past.”

“The anniversary of Liberia’s Comprehensive Peace Agreement is a chance for us to come together and commit anew to keep working to strengthen the foundations of Liberia’s peace and stability,” said a statement from Karin Landgren, the Special Representative of the Secretary-General in Liberia.

“I would like to congratulate the Liberian people, President Ellen Johnson Sirleaf and the Government for their unwavering commitment to the consolidation of peace and to advancing Liberia’s development,” added Ms. Landgren, who is also the head of the UN Mission in Liberia (UNMIL).

To mark the 10th anniversary, thousands of Liberians have for the past several days displayed the country’s red, white and blue flag, and taken part in cultural celebrations in the capital Monrovia and around the country.

Liberia’s civil war lasted 14 years before it ended with the signing on 18 August 2003 of the Comprehensive Peace Accord in Accra, Ghana. It called for, among other things, the establishment of a National Transitional Government and the implementation of a disarmament, demobilization, rehabilitation, and reintegration (DDRR) programme for the country’s ex-combatants.

Some 150,000 people, mostly civilians, were killed during the war, and some 750,000 became either internally displaced or fled the country amidst the violence and instability.

The UN Security Council created UNMIL that year to bolster the accord by helping to restore the rule of law and democratic processes, as well as to facilitate humanitarian assistance.

The security transition in which the Government will progressively take over UNMIL’s responsibilities began in October, marking a new phase for the country.

“Guns in the hands of young people have been replaced by pens and school books,” Ms. Landgren said noting some of the achievements of the past 10 years. “Refugees have returned home with hope for the future, and schools are opening their doors across the nation, to educate future generations of leaders.”

She noted, however, that in the coming months Liberians would have an important opportunity to participate in community meetings on revising the constitution to strengthen foundations of a more democratic and just political system.

Citizens also have an opportunity to become involved in processes under Liberia’s reconciliation roadmap, launched in June.

The UN envoy also called on youth to be involved in the country’s political life: “the Government is increasing access to security and justice services for citizens across Liberia, and I encourage young people to seek careers in these fields.” 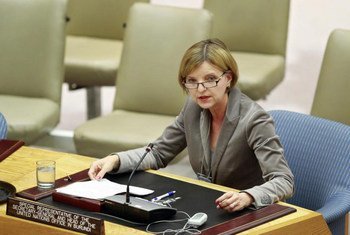 11 September 2012
Liberia has made remarkable progress in rebuilding its institutions, economic recovery and consolidating its democratic processes since the end of its civil war, but it needs to focus on remaining challenges such as strengthening the rule of law, security sector reform and national reconciliation, the Security Council heard today.