20 August 2013
A new United Nations maritime labour convention – hailed as a “bill of rights” for the more than 1.5 million people employed by the shipping industry – comes into force today, aiming to ensure decent work conditions for seafarers while helping provide a level playing field for shipowners.

“I call on all countries with a maritime interest to ratify – if they have not yet done so – and urge Governments and shipowners to work effectively to implement this Convention,” ILO Director-General Guy Ryder said in a statement.

“This Convention is a milestone in maritime history,” added Mr. Ryder, noting that, as the end result of tripartite dialogue and international cooperation, “it enables decent working and living conditions for seafarers to be advanced, along with fair competition for shipowners in this, the most globalized of industries.”

The MLC 2006 needed ratification by 30 ILO member States, representing more than 33 per cent of the world’s gross shipping tonnage, to enter into force.

The convention is also supported by the International Maritime Organization (IMO), which oversees the global shipping sector and responsible for the prevention of marine pollution by ships.

IMO Secretary-General Koji Sekimizu called the MLC 2006 a “truly important landmark” and noted that its entry into force “marks significant progress in the recognition of seafarers’ roles and the need to safeguard their well-being and their working conditions”.

These three IMO treaties were first adopted in the 1970s and have each been ratified by more than 150 countries, representing more than 99 per cent of world merchant shipping. 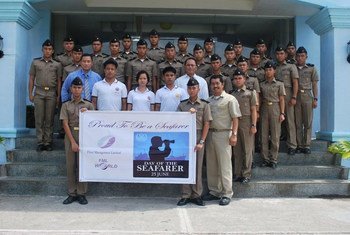 25 June 2013
The United Nations maritime agency is celebrating the International Day of the Seafarer today with a campaign that harnesses the power of social media to highlight the sheer diversity and scale of products used in everyday life that travel by sea, and to recognize the more than 1.5 million people worldwide who deliver them.