The guidelines – released by the World Health Organization (WHO), in conjunction with the UN High Commissioner for Refugees (UNHCR) – are designed to give non-specialized health workers and primary health care workers enough information to provide ‘psychological first aid’ and stress management, and to help people identify and strengthen positive coping methods and social support.

“The big message from WHO is that these disorders are common, they’re disabling and they are usually untreated and this requires an enormous amount of action and resources,” said Mark van Ommeren, a scientist from WHO’s Department of Mental Health and Substance Abuse, noting that many countries have very few psychologists and psychiatrists to attend every person requiring this mental care.

“One of the things they can do after trauma is provide something that’s called psychological first aid, which involves listening to people, asking for their needs and concerns, strengthening their social supports, and protecting them from further harm, discouraging them from making rash decisions in a moment when something really bad happens.”

Mr. van Ommeren added that medicines played a “relatively small role,” noting that benzodiazepines and anti-anxiety drugs which doctors around the world prescribe to patients to enable them to sleep better and for anxiety are actually unhelpful. Therefore, “we’re making a recommendation against them.”

“One of the messages from these guidelines is that, different from other areas of mental health, most of the care is psychological,” Mr. van Ommeren underlined.

The new protocol and guidelines are part of WHO’s Mental Health Global Action Programme and have been published in the Journal of the American Medical Association. 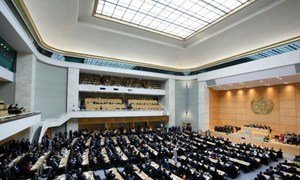 At a time when the world is dealing with myriad challenges, from climate change to food insecurity, it is more important than ever to ensure that public health receives the both the attention and resources it deserves to ensure the well-being of millions, a senior United Nations official said today.