WHO/Pierre Albouy
A wide section of delegates attending the opening of the 66th session of the World Health Assembly in Geneva, Switzerland.

20 May 2013
At a time when the world is dealing with myriad challenges, from climate change to food insecurity, it is more important than ever to ensure that public health receives the both the attention and resources it deserves to ensure the well-being of millions, a senior United Nations official said today.

“We are living in deeply troubled times,” said Margaret Chan, Director-General of the World Health Organization (WHO). “In these troubled times, public health looks more and more like a refuge, a safe harbour of hope that allows, and inspires, all countries to work together for the good of humanity.”

Dr. Chan was addressing the World Health Assembly, WHO’s supreme decision-making body, as it began its 66th session in Geneva. The annual meeting, which this year runs through 28 May, is attended by delegations from all WHO member countries and focuses on a specific health agenda prepared by the Executive Board.

“Fear of new diseases can unite the world, but so can determination to relieve preventable human misery,” she told delegates. “This is what makes public health stand out from other areas of global engagement: the motives, the values and the focus. We know we have to influence people at the top, but it is people at the bottom who matter most.”

She added that nothing reflects this spirit better than the growing commitment to universal health coverage.

“Universal health coverage reflects the need to maximize health outcomes for everyone,” she noted. “Everyone, irrespective of their ability to pay, should have access to the quality health care they need, without risking financial ruin.”

Dr. Chan also stressed the need to ensure that health occupies a high place on the global development agenda beyond 2015, the deadline for achieving the anti-poverty targets known as the Millennium Development Goals (MDGs).

Agreed to by world leaders at a UN summit in 2000, the MDGs include specific targets to reduce child and maternal mortality, HIV/AIDS, malaria and tuberculosis and other diseases by 2015.

“Health contributes to and benefits from sustainable development and is a measurable indicator of success of all other development policies,” said Dr. Chan. “Investing in the health of people is a smart strategy for poverty alleviation. This calls for inclusion of non-communicable diseases and for continued efforts to reach the health-related MDGs after 2015.”

In a message sent to the opening of the Assembly, Secretary-General Ban Ki-moon noted that the MDGs have “undoubtedly been good” for global health. “As we shape plans for the post-2015 era, we must draw lessons from where we have succeeded and ensure that benefits are shared equitably.

“We must keep moving towards universal health coverage, so all people can have access to the health services they need without suffering financial hardship,” he added. “We must build on what has been achieved through the MDGs, but also – as highlighted by the agenda you have set for this meeting – address other pressing health challenges such as non-communicable diseases.”

Dr. Chan noted that the World Health Statistics report, issued last week, brings some “extremely good news,” including dramatic improvements in health in the world’s poorest countries over the past two decades. Progress has been equally dramatic in narrowing the gaps between countries with the best and the worst health outcomes.

At the same time, what lies ahead, especially in tackling non-communicable diseases, is not going to be easy, she added.

At its current session, the Assembly will be considering three draft global action plans – for non-communicable diseases, mental health, and the prevention of avoidable blindness and visual impairment.

Dr. Chan also pointed out that the Assembly is meeting at a time when WHO is dealing with two new diseases. Human infections with a novel coronavirus, from the same family as SARS, were first detected last year in the Eastern Mediterranean Region. To date, 41 cases, including 20 deaths, have been reported.

Though the number of cases remains small, limited human-to-human transmission has occurred and health care workers have been infected, Dr. Chan reported.

Also, at the end of March this year, China reported the first-ever human infections with the H7N9 avian influenza virus. Within three weeks, more than 100 additional cases were confirmed. Although the source of human infection with the virus is not yet fully understood, the number of new cases dropped dramatically following the closing of live bird markets.

“At present, human-to-human transmission of the virus is negligible. However, influenza viruses constantly reinvent themselves. No one can predict the future course of this outbreak,” said Dr. Chan.

“These two new diseases remind us that the threat from emerging and epidemic-prone diseases is ever-present. Constant mutation and adaptation are the survival mechanisms of the microbial world. It will always deliver surprises,” she stated.

“As was the case ten years ago, the current situation demands collaboration and cooperation from the entire world. A threat in one region can quickly become a threat to all.” 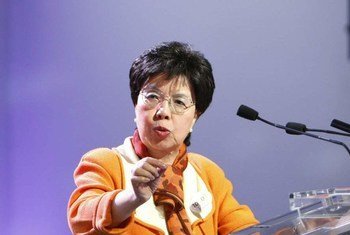 15 May 2013
The health gap between poor and rich countries has narrowed significantly over the past two decades according to a United Nations report released today, which stresses that in spite of this progress, challenges still remain to achieve the health targets of the Millennium Development Goals (MDGs).