Jean Revillard/Rezo.ch
Solar Impulse, an aircraft that can fly day and night without fuel, on a test flight over San Francisco.
9 July 2013

United Nations Secretary-General Ban Ki-moon applauded today the journey of the first solar-powered plane to cross the United States from coast to coast and declared that the historic flight could serve as an inspiration to tackle climate change and promote sustainable development.

“The Solar Impulse flight across the United States proves that with ingenuity, we can harness [solar energy] for impressive results,” said Mr. Ban during an event at a Headquarters to mark the end of the plane's journey and which included Bertrand Piccard and André Borschberg, the founders and co-pilots of the Solar Impulse.

The ultra-light, super-efficient plane, which began its trek in San Francisco in early May, made stopovers in Phoenix, Dallas-Fort Worth, St. Louis, Cincinnati and Dulles before arriving at New York's John F. Kennedy International Airport on Saturday night.

The Swiss-made aircraft is reportedly powered by some 11,000 solar cells, and can reach an altitude of some 30,000 feet, while flying at a top speed of about 70 kilometres per hour.

“Maybe the future Secretary-General, whoever he – or better yet – she, may be, will ride a solar-powered plane,” Mr. Ban said, adding that in the meantime he would continue to push for a legally binding climate change agreement for all countries by 2015.

He recalled that he had recently visited Iceland, where he had seen first had the damage wrought by climate change. Indeed, “this serious threat to our planet” drove sea-level rise that threatened to wipe out entire cultures and sparked natural disasters and extreme weather events that endangered lives and livelihoods worldwide.

Secretary-General Ban Ki-moon is presented with a flag by SolarImpulse co-founders at event. UN Photo/Rick Bajornas

As momentum was building to address the climate crisis, the UN chief said he will continue to promote universal access to energy through his Sustainable Energy for All initiative.

The initiative aims to achieve three linked global targets by 2030: universal access to modern energy services; the doubling of

energy efficiency; and the doubling of the share of renewable energy in the world's energy mix.

“Solar energy can play an important part in realizing these goals,” Mr. Ban said. “Let us take inspiration from your example and harness the power of multilateralism to address climate challenge and achieve sustainable development.”

Mr. Piccard echoed the Secretary-General's belief that the Solar Impulse could spark global action to tackle climate change. Indeed, spotlighting the groundbreaking new technologies that had gone into the plane's development – its carbon fibre structure, electric engines, solar panels and lithium polymer batteries – could help change the discussion on environmental protection and the climate crisis from one about funding to one about motivation and solutions.

The Solar Impulse, he said, could show the world what was possible when innovation was harnessed: new technology could be developed and tested, old consumption patters could be broken and, ultimately, new sources of energy could be produced that were both sustainable and profitable.

“We will fly around the world in 2015…and this can be a beautiful demonstration of how far we can push the application of renewable energy,” Mr. Piccard declared, stressing that genesis of many of the world's environmental challenges was the lack of pioneering spirit.

“So many people are prisoners of old ways of thinking; afraid of the unknown. What we need is pioneering spirit [so] doubts and question marks stimulate the desire to bring new solutions and applications.'

The Solar Impulse and its historic journeys to come “are not only for us,” but about all people who believed in the power of imagination “and who believe that ideas can change the world.” Speaking also for Mr. Borschberg, he told the audience: “This plane belongs to you. I hope you will travel with us.” 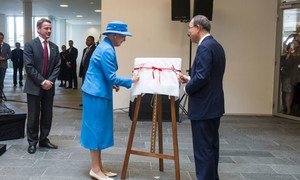 Thanking the people and Government of Denmark for their generous investment and support, Secretary-General Ban Ki-moon welcomed the opening in Copenhagen today of UN City, “a cutting-edge, environmentally friendly hub” for United Nations agency operations.