4 July 2013
Thanking the people and Government of Denmark for their generous investment and support, Secretary-General Ban Ki-moon welcomed the opening in Copenhagen today of UN City, “a cutting-edge, environmentally friendly hub” for United Nations agency operations.

Thanking the people and Government of Denmark for their generous investment and support, Secretary-General Ban Ki-moon welcomed the opening in Copenhagen today of UN City, “a cutting-edge, environmentally friendly hub” for United Nations agency operations.

“UN City is an example of how modern, energy-efficient offices can play their part in building the future we want,” Mr. Ban said, echoing the title of the outcome of last year's landmark Rio+20 summit, which has become the international community's roadmap to sustainability, urging dramatic shifts in consumption and production patterns and protecting and managing the planet's natural resource base.

The Secretary-General hailed the new complex as an important contribution to a more efficient, carbon neutral UN.

“From the rows of parked bicycles to the wind turbines out to sea, I see proof that we can tackle the climate challenges that face us,” he said, adding further: “From solar panels to seawater cooling and external metal blinds to regulate light and heat, UN City shows what can be achieved. Estimated energy consumption will be cut by more than half.”

The concept of a more efficient and coherent UN was first strongly underlined in the Millennium Declaration, adopted by world leaders in 2000. The Danish Government, wishing to lend its support in practical terms to the idea, decided soon afterwards to investigate the possibilities of moving eight Copenhagen-based UN agencies into one single compound.

Once complete, Mr. Ban said, UN City will house around 1,200 personnel from the organizations providing support to crucial humanitarian, peacebuilding and development operations around the world.

“Bringing so many UN organizations together in one location allows for shared logistics, administration, networking and collegiality – enhancing cooperation and ability to 'Deliver as One',” he added.

He said that the work carried out by the UN agencies in Copenhagen “makes a real difference to the lives of the poor and vulnerable,” and Denmark should be “rightly proud” of its contribution.

Further, he said that Denmark is also one of a handful of countries to meet the UN target of devoting at least 0.7 per cent of gross national income to official development assistance (ODA). Indeed, the Nordic country has met and often exceeded that target for the past 35 years.

“In a word, Denmark delivers,” he declared, adding: “UN City is one more example. This is a place where good things are happening and where even more can and will be done.” 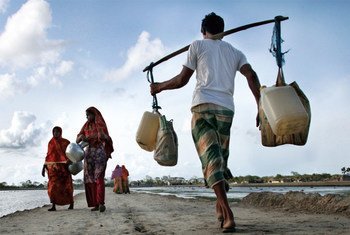 1 July 2013
Thirteen years after the world set the Millennium Development Goals (MDGs), countries have made big strides to meet the eight anti-poverty targets by their 2015 deadline, says a United Nations report released today, which stresses that the unmet goals are still within reach, but nations need to step up their efforts to achieve them.