In a letter sent to G20 leaders ahead of the summit, to be held in Los Cabos, Mexico, on 18 and 19 June, Mr. Ban noted that the meeting is taking place against a backdrop of uncertainty.

“A modest economic recovery in some countries should not disguise the precarious state of the world economy,” said the Secretary-General, who will travel to the summit on Monday.

The euro crisis remains a cause of concern, and growing volatility in commodity prices and financial markets is already having an impact on emerging markets and developing economies, he wrote.

“Any further banking sector and sovereign debt crises in advanced economies would cause serious setbacks to poverty reduction, leading to even more widespread joblessness and risking political upheaval worldwide,” he noted. “The key in the months ahead is to prevent bank runs and financial panic, and to renew commitment to sustainable development.

Stressing that “meaningful results in Los Cabos are essential,” Mr. Ban added that it is important to tackle the jobs crisis head-on, through productive investment, targeted policies and a coordinated short-term stimulus. Inclusive green growth, he said, can create jobs, safeguard hard-won progress in poverty alleviation and underpin sustainable development.

He reiterated that the UN Conference on Sustainable Development (Rio+20), opening in Rio de Janeiro, Brazil, next week, is a “once-in-a-generation opportunity” to send a signal that leaders across the world are committed to equitable growth and greater prosperity for all, on a healthy planet that can sustain present and future generations.

Mr. Ban will also take that message with him when he travels to Rio+20, which will bring together over 100 heads of State and government, along with thousands of parliamentarians, mayors, UN officials, chief executive officers and civil society leaders to shape new policies to promote prosperity, reduce poverty and advance social equity and environmental protection. 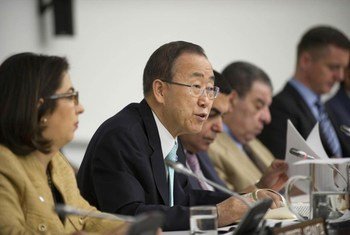 Ahead of summit, Ban urges G20 to focus on promoting sustainable economic growth