Mr. Bathily has been serving as Senior Minister in the office of the President of Senegal since 2012. Prior to this, he served as minister of the environment and as minister of energy.

Mr. Bathily also served as a Member of the Economic Community of West African States (ECOWAS) Parliament, member of the African Union Contact Group on the crisis in Madagascar, and participated in various conflict resolution missions to countries in West Africa, including Liberia, Sierra Leone, Guinea Bissau, Niger, Guinea and Mali.

In addition, he has extensive knowledge of African history, and has taught and published extensively on this subject.

In April, the Security Council approved the 12,600-strong MINUSMA to take over from the African-led force, authorizing the blue helmets “to use all necessary means” to carry out security-related stabilization tasks, protect civilians, UN staff and cultural artefacts and create the conditions for provision of humanitarian aid.

MINUSMA's core task is to support the political process in Mali, in close coordination with the African Union (AU) and the Economic Community of West African States (ECOWAS).

Mr. Gressly has more than 20 years of experience with the UN system, having served with the United Nations Children's Fund (UNICEF) in various capacities, including in Nigeria, Côte d'Ivoire, Guinea and Senegal.

He served as Regional Coordinator in the UN Mission in Sudan (UNMIS) from 2008 to 2011; and subsequently as Regional Humanitarian Coordinator for the Sahel from 2012 to 2013, where he led the humanitarian response to the food security and nutrition crisis in the region last year. 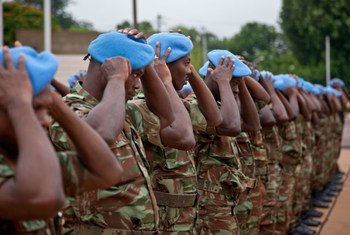 1 July 2013
A new United Nations peacekeeping mission for insurgent-beset Mali was launched today as forces from a previous, African-led international force officially donned the blue berets that identify the operations of the world organization.