8 July 2013
On the eve of the second anniversary of South Sudan's independence, the top United Nations envoy there today commended the progress made so far while also noting the many challenges facing the young nation such as tackling insecurity, addressing human rights violations and strengthening public institutions.

On the eve of the second anniversary of South Sudan's independence, the top United Nations envoy there today commended the progress made so far while also noting the many challenges facing the young nation such as tackling insecurity, addressing human rights violations and strengthening public institutions.

South Sudan became independent from Sudan on 9 July 2011, six years after the signing of the peace agreement that ended decades of warfare between the north and the south. Over the past two years, the UN Mission in South Sudan (UNMISS) has been assisting the country in consolidating peace and security and helping to establish conditions for development.

“Many of us witnessed the outpouring of euphoria that greeted the dawn of independence of South Sudan. The mood of that day now seems like a fading memory,” Hilde F. Johnson, the Secretary-General's Special Representative and head of UNMISS, told the Security Council in a briefing via video-link from the capital, Juba.

“We have since seen many setbacks and problems, and tensions with Sudan driving decisions that were challenged by many, including this Council,” she added.

Progress to date includes improved relations with the Sudan, the internal dialogue with armed groups, and a renewed commitment to advancing the national reconciliation process. At the same time, a key challenge is the security situation in Jonglei state, where fighting between Government forces and armed groups has displaced thousands of civilians since January.

“The deterioration in the security situation in parts of South Sudan has been accompanied by human rights violations by both armed groups and national security institutions. National and state authorities are struggling to translate their commitments to improve respect for human rights into action,” she stated.

“Cases of arbitrary arrest, detention, abuse and incidences of killings by security forces, as well as the inability of the authorities to hold those responsible to account, are cause for deep concern.”

Echoing the call made by Secretary-General Ban Ki-moon in his latest report on South Sudan, Ms. Johnson urged the Government to establish effective, long-term strategies to address the underlying causes of perennial violence.

She added that UNMISS continues to support the Government's efforts to seek political solutions to inter-communal conflict and peace initiatives aimed at bringing durable solutions to disputes over scarce natural resources.

“The Mission is encouraging local authorities, community leaders and national figures to reinforce their efforts to foster reconciliation. It is also essential that national and state authorities, and the communities themselves, take the lead and assume full ownership of such processes.”

The key determinant for developments in South Sudan, said the envoy, remains its relations with Sudan. Noting setbacks such as counter-accusations by both sides of military support to rebel groups in each other's territories, and the threat by Sudan to shut down the oil pipeline, Ms. Johnson said both countries should strengthen their cooperation towards peaceful coexistence.

Wrapping up his visit to South Sudan yesterday, the UN peacekeeping chief said the challenges facing the country could not all be solved at once, but UNMISS is working to support it in becoming a modern State with working institutions and full respect for human rights.

“A lot has already been achieved in two years,” said Under-Secretary-General for Peacekeeping Operations Hervé Ladsous. “We are working solidly with the Government… to continue making progress in providing the citizens with all that they expect from the state.”

During the three-day visit that began on 5 July, Mr. Ladsous met with President Salva Kiir in Juba, with whom he discussed resolving tensions in Jonglei as well as UNMISS support for national political processes such as the constitutional review, legal and judicial reforms and capacity-building of national police.

Accompanied by Ms. Johnson, he also met with the Governor of Jonglei, Koul Manyang Juuk, and members of his cabinet in Bor to discuss the security and humanitarian situation in the conflict-ridden state.

Mr. Ladsous also visited the UNMISS Indian contingent and paid tribute to peacekeepers who lost their lives in an attack by unknown assailants in April. 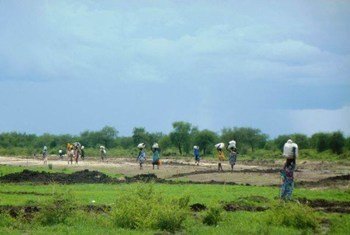 16 May 2013
Additional United Nations peacekeepers are on alert to protect civilians in the town of Pibor in South Sudan’s Jonglei state where the situation remains tense amid recent violence, looting and displacement, the Secretary-General’s spokesperson today said.