1 July 2013
More than 150 representatives of civil society, the private sector and the farming industry met over the weekend in Addis Ababa, Ethiopia, to establish partnerships to guarantee food security in Africa during a United Nations-organized meeting.

“We hope that this meeting will help us to coordinate and mobilize further our common efforts to promote food security,” the Director-General of the Food and Agriculture Organization (FAO) Jose Graziano da Silva said on Saturday at the high level meeting of African and international leaders to end hunger in the continent.

“The challenge of overcoming hunger in Africa is huge. Africa is the only region that saw hunger numbers go up after 1990.”

According to FAO, Africa has 239 million undernourished people, representing nearly a quarter of the entire population. This figure is particularly disturbing considering the continent has experienced economic growth of unprecedented proportions as well as improved governance and human development indicators in the last decade.

Mr. Graziano Da Silva said that increasing food production is not enough to end hunger because the main cause of food insecurity is insufficient access to the resources needed to produce food or to income to buy it.

Countries that combine action to increase small-scale production with social protection, cash-for-work programs and other similar initiatives are successfully managing to tackle hunger, he added.

Participants at the high-level meeting stressed the importance of the involvement of all sectors in the fight against hunger and called on Governments to commit to the eradication of hunger in Africa by 2025.

The high-level meeting was co-organized by the African Union, FAO and the Lula Institute, who forged this partnership to act upon the political will existing in the region, and transform it into coordinated action to end hunger.

Mr. Graziano da Silva underlined the many areas in which the participation of non-state actors are important in the fight against hunger and reaffirmed FAO's commitment to an “open door policy” with partners. 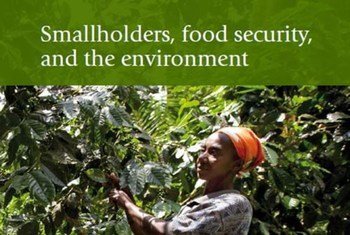 4 June 2013
Given the right conditions and targeted support, small farmers can unleash a new and sustainable agricultural revolution, according to a new United Nations report released today on the eve of World Environment Day.