IFAD
an estimated 2.5 billion people who manage 500 million smallholder farm households provide over 80 per cent of the food consumed in much of the developing world.
4 June 2013

According to the report, Smallholders, Food Security and the Environment, an estimated 2.5 billion people who manage 500 million smallholder farm households provide over 80 per cent of the food consumed in much of the developing world, particularly Southern Asia and sub-Saharan Africa.

The report, commissioned by the UN Environment Programme’s World Conservation Monitoring Centre (UNEP-WCMC) and the International Fund for Agricultural Development (IFAD), also shows that most of the 1.4 billion people living on less than $1.25 a day live in rural areas and depend largely on agriculture for their livelihoods.

“Smallholder farmers can continue to be marginalized or be recognized as catalysts for a transformation of the way the world manages the supply of food and the environmental services that underpin agriculture in the first place,” Mr. Steiner added in a joint news release by UNEP and IFAD.

Earlier studies cited by UNEP and IFAD show that a one per cent increase in agricultural per-capita Gross Domestic Product (GDP) has five times the impact on the poverty gap than the same increase in GDP in other sectors.

One study demonstrated that for every ten-per-cent increase in farm yields, there was a seven-per-cent reduction in poverty in Africa, and a reduction of over five-per-cent in Asia.

The report makes it clear that investing in the agricultural sector offers the highest rate of return for those interested in overcoming poverty, Mr. Steiner said, and speeds progress towards reaching the eight anti-poverty targets known as the Millennium Development Goals (MDGs) and building a post-2015 sustainable agenda.

Support for the small farming sector also supports the UN Secretary-General’s Zero Hunger Challenge which, among its goals, aims to achieve 100 per cent access to adequate food all year round, and the UNEP-UN Food and Agricultural Organization’s (FAO) ‘Think East Save: Reduce Your Footprint’ campaign to cut down food waste.

“Smallholder farmers hold a massive collective store of experience and local knowledge that can provide the practical solutions needed to put agriculture on a more sustainable and equitable footing,” said Elwyn Grainger Jones, Director of IFAD’s Environment and Climate Division.

“To place these smallholders at the forefront of a transformation in world agriculture, they need appropriate support to overcome the many challenges they face,” Mr. Jones added.

Among its recommendations, the report advocates for taking into account the needs of the farmers, who advocate for shifting the focus in sustainable agriculture from minimizing the negative impacts of farming on the environment to greater growth opportunities for them.

The report also advocates investment in market-based mechanisms that provide smallholders with incentives to invest in sustainability, such as removing subsidies on unsustainable fertilizers or expanding fair or green certification schemes that allow smallholders to compete in new niche markets locally and internationally.

Today’s report is ahead of World Environment Day (WED) on 5 June. Hosted this year in Mongolia, the Day’s theme is closely linked to food security, focusing on reducing the estimated one third of all food produced - 1.3 billion tonnes, worth around $1 trillion - that is wasted or lost each year. 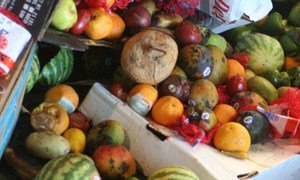 Fermenting birds, naturally freeze-drying potatoes and squeezing meat on a saddle are some of the traditional methods used by cultures around the world to preserve food highlighted today by the United Nations environment agency, which is stressing the importance of reducing food waste.