Two senior United Nations officials in the Democratic Republic of the Congo (DRC) have condemned the recent cases of rape of young girls in the eastern province of South Kivu as “unacceptable” and called for an end to such abuse.

Over the past two months, nine young girls aged between 18 months and 12 years old have been admitted to Panzi Hospital in South Kivu with marks of violence on their bodies and very serious internal wounds, resulting in the death of two children and numerous grave health complications and untold psychological problems for the survivors, according to a joint news release from the UN peacekeeping mission in DRC (MONUSCO) and the UN Children's Fund (UNICEF).

“Such violence and abuse is unacceptable and must be brought to an immediate end,” said the Secretary-General's Special Representative and head of MONUSCO, Roger Meece, and the Country Representative of UNICEF, Barbara Bentein.

“These abuses are said to be related to harmful traditional practices perpetrated by individuals who kidnap young children from their communities,” they added.

“These practices are in violation of international and national laws as they undermine the full realization of the rights of the child with serious implications on the child's protection, survival and development.”

UNICEF and MONUSCO said they are mindful of the steps that have been taken by Congolese authorities to arrest two suspects implicated in the cases, which occurred in Kavumu–Lwiro axis.

“Nonetheless, these must be accompanied by concrete measures to conduct full investigations and prosecution of all perpetrators involved in this despicable practice,” they stated.

They pledged the UN's continued support to the Government of DRC, civil society organizations and other partners towards ensuring accountability for perpetrators of sexual violence as well as providing adequate support to the survivors.

UN agencies estimate that at least 200,000 women have been raped in the country since 1998, and eastern DRC has been described by one former senior UN official as the “rape capital of the world.” 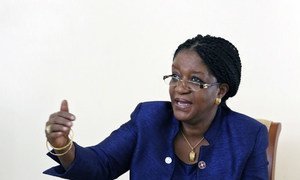 Conflict-related sexual violence is one of the most urgent challenges facing the Democratic Republic of the Congo (DRC), a senior United Nations official says, stressing that leadership and responsibility on the part of the Government is critical to tackling this issue.