FAO
One-third of all food produced worldwide is lost or wasted.
21 May 2013

Fermenting birds, naturally freeze-drying potatoes and squeezing meat on a saddle are some of the traditional methods used by cultures around the world to preserve food highlighted today by the United Nations environment agency, which is stressing the importance of reducing food waste.

“Reducing food waste and loss is an economic, ethical and environmental challenge that links to some of the greatest challenges of today, from hunger and nutrition to climate change, deforestation and land degradation,” the Executive Director of the UN Environment Programme (UNEP), Achim Steiner, said.

“One of the ways everyone can contribute to these twin challenges is by looking at how less-wasteful cultures place such value on every morsel of food and considering how to emulate them,” Mr. Steiner added.

Each year, an estimated one third of all food produced – equivalent to 1.3 billion tonnes worth around $1 trillion – ends up rotting in the bins of consumers and retailers, or spoiling due to poor transportation and harvesting practices, according to the agency.

UNEP emphasized that unconsumed food wastes both the energy put into growing it and the fuel spent on transporting produce across various distances, adding that this significant amount of waste has serious moral implications in a world where almost 900 million people go hungry every day.

As part of its campaign Think.Eat.Save. Reduce Your Foodprint, and ahead of the celebrations of World Environment Day on 5 June, UNEP asked people to submit examples of traditional ways in which food is preserved.

In Mongolia, troops condensed the equivalent of the beef of an entire cow into the size of a human fist. This remarkable method of food preservation, without refrigeration, produced a meal equivalent to several steaks when the protein was shaved into hot water to make soup.

In Turkey, horsemen would preserve meat by placing it in pockets on their saddles to be compressed by their legs as they rode. In Greenland, the Inuit would wrap birds in seal skin, removing the air before sewing it up. The birds then ferment for around seven months before they are dug up and eaten, often at celebrations.

In South America, a freeze-dried potato delicacy known as chuño, which pre-dates the Inca Empire, is widely eaten. The potatoes are alternately exposed to the freezing night air and hot daytime sun for five days, being trampled to squeeze out all moisture. Chuño can last for months or years.

“In industrialized regions, almost half of the total food squandered, around 300 million tonnes annually, occurs because producers, retailers and consumers discard food that is still fit for consumption—more than the net food production of Sub-Saharan Africa and enough to feed the world’s hungry,” UNEP said in a news release, adding that while traditional methods of preserving food may not be adaptable to all regions and cultures, they do underline how much room there is for consumers to change the way they buy, store and consume food.

World Environment Day aims to be the biggest and most widely celebrated global day for positive environmental action. This year’s theme supports UNEP’s anti-food waste and food loss campaign and encourages individuals to reduce their ‘food-print.’ 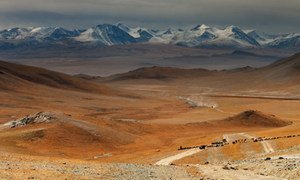 Mongolia will host this year’s World Environment Day (WED) celebration on 5 June, which will focus on reducing food waste and loss, the United Nations announced today.