Secretary-General Ban Ki-moon today encouraged Caribbean countries to build on the successes of decolonization, in remarks to a United Nations-sponsored regional seminar in Quito, Ecuador.

“I encourage you to use this seminar to show how statements of principle can be transferred into action. Let us build on the many successes of decolonization,” Mr. Ban said in his message to the Caribbean Regional Seminar on Implementation of the Third International Decade for the Eradication of Colonialism.

“Let us also retool and rejuvenate our methods of work and become true ‘enablers’ of the decolonization process,” he said in the message, which was delivered to the event by Diego Zorrilla, UN Resident Coordinator of Ecuador.

Throughout the seminar, country representatives will focus on the role of the UN Special Committee on Decolonization in advancing the UN decolonization process. The committee, known formally as the Special Committee on the Situation with regard to the Implementation of the Declaration on the Granting of Independence to Colonial Countries and Peoples, was set up two years after the adoption of the Declaration by the General Assembly.

More than 80 former colonies, comprising some 750 million people, have gained independence since the creation of the UN. The 16 remaining Non-Self-Governing Territories are home to nearly two million people.

“Enhanced dialogue and communication among the Special Committee, the elected representatives of the Non-Self-Governing Territories and the administering Powers are essential,” Mr. Ban said in his remarks.

In his address to the Special Committee in February, Mr. Ban suggested that it identify possibilities for change and promote priorities for decolonization, and the three-day seminar seeks to facilitate informal exchanges that will inform the Special Committee before it begins its forthcoming session, which starts on 10 June.

♦ Receive daily updates directly in your inbox - Subscribe here to a topic.
♦ Download the UN News app for your iOS or Android devices.
Decolonization 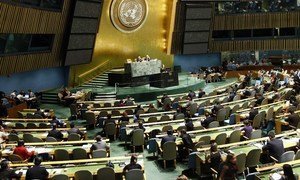 The United Nations General Assembly voted on Friday to place French Polynesia back on the UN list of territories that should be decolonized and requested the French Government to “facilitate rapid progress […] towards a self-determination process.”