UN Photo/John Isaac
Namibia's struggle for independence had been on the UN agenda for over 40 years. Pictured here is a worker puts the finishing touches to a billboard near Windhoek, proclaiming the nation's independence.

Since the early 1960s, the United Nations decolonization committee has “accompanied many territories in their journey”, Secretary-General António Guterres said on Thursday, opening the body’s 2019 session.

Reminding the Special Committee on Decolonization that as a Portuguese national, he came from a country oppressed by dictatorship, Mr. Guterres called the decolonization agenda “an area close to my heart and to which I reiterate my commitment.”

Back in 1946, some Member States identified a roster of non-self-governing territories and placed them on a UN list. In 1960 the Declaration on the Granting of Independence to Colonial Countries and Peoples was adopted and the following year the General Assembly established the Special Committee, known by the shorthand ‘C-24’ after its original 24 members, to monitor its implementation.

"Decolonization helped to transform the UN membership, from 51 original members to 193 today. It is one of the most significant chapters of the UN history. But this story is still being written, as 17 Non-Self-Governing Territories remain." - @antonioguterres on #decolonization pic.twitter.com/wsk7Cf4Ec8

Over the years this process has resulted in the removal of most territories from the list.

“But this story is still being written,” the UN chief continued, “as 17 non-self-governing territories remain,” each waiting to attain self-government, in accordance with Chapter XI of the UN Charter, the 1960 Declaration and relevant UN resolutions.

Among other things, the Special Committee annually reviews the territories remaining on the list – making recommendations on implementation and supporting the dissemination of public opinion information on the decolonization process.

He commended France, the country administering the territory, on its cooperation throughout the process – in accordance with the 1998 Nouméa Accord, which set out that a referendum on self-determination would be held by 2018.

Meanwhile, the Special Committee assisted in the period leading up to the referendum, including by dispatching two visiting missions to New Caledonia.

“To achieve decolonization, the voices of the peoples of the territories should be heard,” underscored Mr. Guterres adding that “likewise vital” was the cooperation of all concerned, including the administering powers.

To achieve decolonization, the voices of the peoples of the territories should be heard – UN chief

That the people of the non-self-governing territories understand the options regarding their political status and right to choose their future freely is “paramount,” according to the UN chief.

As he wished the Committee “every success” throughout the 2019 session, Mr. Guterres said: “The UN’s decolonization successes across the decades can inspire us today.”

“Let us uphold our duty to assist all the peoples of the non-self-governing territories in bringing their decolonization process to a successful conclusion, according to their own choice,” concluded the Secretary-General.

The C-24 also observes the Week of Solidarity with the Peoples of Non-Self-Governing Territories. 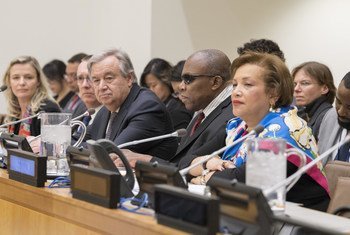 Secretary-General António Guterres on Thursday opened the annual session of the United Nations General Assembly organ aiming to end colonialism, noting that decolonization was a central aspect of his previous political life in Portugal.