28 May 2013
Fighting in Darfur, Sudan has killed an estimated 300,000 people and displaced some 2 million others. Mariam Gamous, a Darfur native and civilian peacekeeper with the UN-African Union mission in Darfur, known by the acronym UNAMID, was there when the troubles began in 2003.

“I remember the conflict,” recalled Ms. Gamous, a resident of the Darfur town of El Fasher. “I remember the fear as people were displaced, killed and fled across the borders.”

As combat between rebels, the Government and associated armed groups intensified, Ms. Gamous hit the field along with humanitarian workers from many non-governmental organizations to help allay the effects of the violence on the civilian population.

“During that time, I provided support to many people who were affected by and suffering from the war,” she recently told the UN News Centre by email.

“They required a lot of protection, psychological support and rehabilitation in order to reduce the stress from which they suffered and to provide them with basic human needs.”

In 2008, Ms. Gamous joined UNAMID’s Rule of Law section as a corrections officer, pursuing her desire to participate in the UN’s peace initiatives in the area.

“In my role as a correction officer, I conduct daily and weekly visits to the area’s prisons in order to provide advice, mentoring and technical support to the prisons’ management and staff,” she explained.

“In addition, I conduct training and capacity building programmes with prison staff for skill development as well as providing support for infrastructure upgrades such as juvenile homes and children-friendly spaces, in order to improve the general living and working conditions.”

Other programmes in the penal system focus on improving the quality of life of the area’s prison population through activities that range from the making of arts and crafts and organizing local soccer matches to seminars on gender issues and HIV/AIDS awareness.

Ms. Gamous would like to broaden her activities as well. “The only challenges I face on a daily basis are related to funding. With enough budgeted funding, I would further implement different activities with female prisoners, especially those incarcerated with children,” she said. 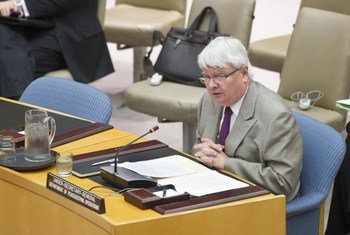 29 April 2013
With inter-communal clashes in Darfur having sparked recent deadly violence and security restrictions hindering the efforts of peacekeepers, the United Nations peacekeeping chief today urged the international community to press the belligerent parties to reach a political settlement.