UN Photo
Walters Samah was one of the first people to reach the epicentre of the Haiti earthquake. The Civil Affairs Officer is a UN Volunteer.

28 May 2013
After a 7.0 earthquake struck Haiti on 12 January 2010, United Nations Volunteer Walters Tohnji Tikum Samah was one of the first from the UN Stabilization Mission in Haiti (MINUSTAH) to visit its epicenter, Léogâne, some 25 km west of the capital, Port-au-Prince.

“It’s amazing to see how far the city has come,” Mr. Samah said. “Life is returning to relative normalcy for most. Today what one sees is not a city of rubble it was in 2010 but a city in reconstruction. Roads are being repaired, new residential houses are under constructions and businesses are cropping up again.”

“These projects are providing jobs for many young people who are beginning to feel positive about the future of their municipality compared to three years ago,” he added.

As a Civil Affairs Officer, UNV Samah was part of the Mission’s Parliamentary Support and Liaison Unit interfacing with the Haitian Parliament, civil society and local authorities to strengthen state institutions.

Following the quake, Mr. Samah had to adapt to the changing needs of the Mission. His state-building role expanded to include working with aid organizations, assisting local risk and disaster management committees in preparing contingency plans and monitoring population movements.

“I was often also called to support other sections within MINUSTAH,” Mr. Samah said, in jobs that ranged from assisting the Chief of Staff to working with the Human Rights Section in security assessment surveys in internally displaced camps in Port-au-Prince.

UNV Samah with a bicameral delegation of senior parliamentary staff during an exchange visit in the Dominican Congress. UN Photo

Beyond MINUSTAH, UNV Samah has also taken volunteerism to the community level, working actively with child-centered institutions to empower orphans and street children. “My work has given me the feeling of self-satisfaction derived largely from the fact that I am making a worthy and meaningful contribution,” said Mr. Samah, a Cameroon national who has been working in Haiti since 2008.

The relationship between UN peacekeeping and UNVs is highly regarded. In a 2001 interview with Mr. Sergio Vieira de Mello, then Head of the UN effort in Timor-Leste, he said the following when asked about the role UN Volunteers play in peacekeeping efforts:

“The first association is precisely this proximity with the field. UN Volunteers lack fortunately the characteristics of career bureaucrats of which I'm an example in the sense that they are truly focused and committed to assist developing countries not from the headquarters perspective, not from the career advancement point of view, but as volunteers. This by definition commits them to actually translate the ideals of the United Nations, and of this mission in particular which are very ambitious, into reality on the ground.”

UNVs continue to have a strong presence in the UN family today, encouraging experienced adults and younger individuals to work in the field and support the UN’s priorities.

The Secretary General's Special Envoy on Youth, Ahmad Alhendawi, has a personal connection with peacekeeping.

“My brother served in Haiti with the peacekeepers. He was there during the earthquake, so I know the challenges they face. But I also know how committed they are to bring about peace,” he said. “The peacekeepers are the first bridge, in many cases, from a bloody present to a peaceful future. They reinforce peace, and embody the ideals of the United Nations. 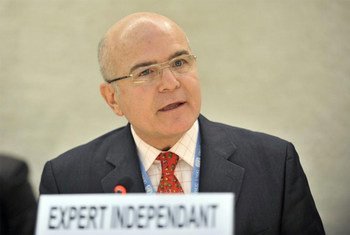 8 March 2013
An independent United Nations human rights expert today wrapped up a visit to Haiti by calling for the strengthening of State institutions so they can play their key role in the running of the country and in the functioning of democracy.