29 April 2013
With inter-communal clashes in Darfur having sparked recent deadly violence and security restrictions hindering the efforts of peacekeepers, the United Nations peacekeeping chief today urged the international community to press the belligerent parties to reach a political settlement.

“The situation in Darfur is every troubling,” Hervé Ladsous, Under-Secretary-General for Peacekeeping Operations, said as he briefed the Security Council on the work of the African Union-United Nations mission in the conflict-torn Western region of Sudan, known as UNAMID.

Resolving the conflict continued to require a combined effort by the Council, the African Union and the wider international community to persuade the belligerent parties that “there is no military solution to the crisis”. In this connection, maintaining attention on the situation in Darfur amidst a series of newer crisis remained as important as ever.

“The people of Darfur have known conflict and suffering for too long,” he said, urging the Council to do all it could to help relieve their suffering and bring about an end to the fighting, by supporting UNAMID and by applying additional pressure on the belligerent parties to reach a negotiated settlement.

Mr. Ladsous said that despite “mildly encouraging” developments in the peace process, a fully inclusive political settlement was yet to be reached. UNAMID was working hard to implement its mandate in those very challenging circumstances. Better cooperation on the part of the Sudanese authorities and improvements in troop and police continent equipment levels were needed to enable the mission to operate at closer to its full potential.

As for recent developments linked to the peace process, he said that on the political front, in the run-up to the Donors Conference on 7-8 April, internally displaced persons had launched peaceful protests in Kalma and d’Hassa Hissa camps, in south and central Darfur. They spoke of insecurity, unresolved land disputes and the predominance of armed militias, as reasons why they opposed the Doha Conference.

Nonetheless, participants at the Conference expressed support for the Darfur development strategy, he said, pledging a total $3.7 billion, including $2.65 billion previously committed by Sudan and $500 million by Qatar. The total missed the $7.2 billion goal expected for the six-year development strategy.

As for the adoption of the Doha Document by the Justice and Equality Movement (JEM), led by Mohamed Bashar, he said hostilities had broken out between them and forces loyal to Jibril Ibrahim, near Darma, northeast of El Geneina on 18 April. UNAMID was looking for cause of clashes.

On 24 April, the Liberation and Justice Movement announced it would immediately withdraw from the Government, over delays in the implementation of the Doha Document and the expulsion from Sudan of the International Republican Institution earlier that day, a non-governmental group providing capacity building and technical assistance to the Movement to support its transition into a political party. High-level negotiations between the National Congress Party and JEM were ongoing.

As regards security, he said intensified conflict in Darfur due to military standoffs, as well as inter-community standoffs, was a source of concern. Clashes displaced more than 200,000 people, including 24,000 to Chad – more than last year’s total.

Following those hostilities, the Government and the Sudan Liberation Army (SLA) - Minni Minawi, clashed in east and south Darfur. On 6 April, SLA – Minni Minawi took control of Labado and Muhajeria in east Darfur. The next day, they took Ishma village in south Darfur. As a result, some 33,000 people remained near the UNAMID bases of Muhajeria and Labado.

Sporadic fighting between the groups continued and spread eastwards, between 6 and 17 April, to Rehed El Birdi, 245 km southwest of Nyala in South Darfur and northwards to Darley, 130 km south of Zalingei, Central Darfur. He said that community sources estimate that upwards of 68 people had been killed and 60 injured in the clashes.

Movement restrictions and other obstructions imposed by the belligerent parties had continued to hamper UNAMID operations, Mr. Ladsous noted. Earlier this month, Government security forces had forcibly prevented UNAMID helicopters from departing Shangil Tobaya and Afaf Umra, respectively, after the crews had refused to transport local officials not on the flight manifest. The flights eventually took off without the officials on board after several hours of negotiations.

As for visa issuances, he said that on 3 April, the authorities had issued 401 new entry visas for UNAMID civilian police but, as of 25 April, 858 visas had remained outstanding, including 533 for civilian police. To address those and other issues impeding UNAMID operations, he said the tripartite coordination mechanism between the African Union, the United Nations and the Sudanese Government met in Addis Ababa on 15 April, with the Government representatives present urging UNAMID to coordinate more closely with Darfur security officials to improve access.

In addition, participants had agreed to review the validity of outstanding visa requests submitted in 2011 and 2012, he said. 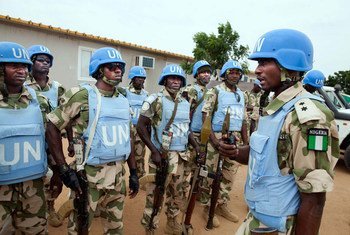 18 April 2013
The head of the African Union-United Nations Mission in Darfur (UNAMID) today urged the Government to ensure humanitarian access to two villages in East Darfur State, where thousands of civilians require assistance.