UN Photo/Rick Bajornas
Delegates in the General Assembly Hall at the opening of the twelfth session of the Permanent Forum on Indigenous Issues.

20 May 2013
Around 2,300 indigenous participants are expected to discuss culture, education and health during the 12th session of the United Nations Permanent Forum on Indigenous Issues, which will include a special focus on youth, indigenous groups in Africa and the importance of strengthening ties with international financial institutions.

“We must have a better understanding of the views and values of indigenous peoples by engaging them in decision-making and providing a platform for issues affecting their lives and livelihoods,” Secretary-General Ban Ki-moon urged in a message at the opening of the 12th forum delivered by Wu Hongbo, Under-Secretary-General for Economic and Social Affairs

The two-week gathering will be overseen by Paul Kanyinke Sena, Chair of the UN Permanent Forum, who stressed that culture, education and health are the basic rights for all people, “They are at the core of indigenous peoples’ right to life, our right to dignity and well-being.”

In his opening address, Mr. Sena noted that the concept of health and healing for indigenous people includes not only access without discrimination to social and health services, but also includes connections with family, land and language, as well as access to traditional plans, animals and minerals.

He also stressed the importance of local languages in school and the right of indigenous people to establish and control the education of their children in a manner appropriate to their cultural methods of teaching and learning.

The day’s programme includes discussions about indigenous issues from the perspective of young people based on the findings of a report by the UN Expert Group Meeting, held in January 2013, on identities, challenges and hopes of indigenous youth.

Out of the 370 million indigenous peoples in the world, approximately 67 million are youths, according to figures cited in the report.

In addition to today’s official discussions, five side events with highlight issues of health and reproductive rights, investing in indigenous youth, education, the launch of an adolescent-friendly version of the UN Declaration on the Rights of Indigenous Peoples, as well as of a study on violence against indigenous girls, adolescents and young women.

Youth is one of Mr. Ban’s priority areas, and he launched the development of a System-Wide Action Plan on youth (SWAP) to deepen the youth focus of existing UN programmes, and appointed Ahmad Alhindawi as his envoy on the topic.

Later in the week, the Forum will focus on issues related specifically to the estimated 50 million indigenous people living in Africa, who in addition to fighting claims to their indigenous lands and competition for natural resources, also face challenges to recognition of their indigenous identity.

The Forum is expected to adopt recommendations at the conclusion of the discussion, addressing the main issues, challenges and positive measures of cooperation to improve the situation of indigenous peoples in Africa, according to the Forum organizers.

“It is time to turn the rights enshrined in the UN Declaration on the Rights of Indigenous Peoples into a reality around the world, especially in the African region,” said Mr. Sena who is the first African to chair the Forum, representing the Ogiek people in Kenya.

“The World Bank is sending a delegation of 30 people, the largest so far so you can see how seriously they are taking the Forum,” Mr. Sena told journalists in New York. He spoke in a press conference alongside Andrea Landry, Canadian Youth Representative; Setareki Macanawai, Chief Executive Officer of the Pacific Disability Forum in Fiji, and other representatives.

Financial resources were also part of today’s discussion. In his opening statement, Mr. Hongbo highlighted the contributions of Member States to the UN Trust Fund on Indigenous Issues which issues small grants of $10,000 to indigenous organizations working on related issued, particularly in health and education.

Applications are being assessed this month with the aim of “strengthening international cooperation for the solution of problems faced by indigenous peoples in such areas as culture, education, health, human rights, the environment, social and economic development by means of action-oriented programs and specific projects, increased technical assistance and relevant standard-setting activities,” according to its website.

In his speech, Mr. Hongbo reiterated Mr. Ban’s message of the importance of inclusion of indigenous issues and point of view in the UN agenda. “The United Nations has committed its unwavering support to a future where all indigenous peoples will enjoy peace, human rights and well-being. It has welcomed indigenous peoples as partners,” he said.

This year’s Forum will also look forward to the first World Conference on Indigenous Peoples in September of next year and decide on a potential theme. Two-hundred indigenous participants from seven regions are to be invited.

The preparations for the World Conference coincide with ongoing discussions of a post-2015 development agenda to success the current eight anti-poverty targets known as the Millennium Development Goals (MDGs).

While there is no specific reference to indigenous peoples in the MDGs, the Permanent Forum have highlighted the relevance of indigenous concepts and practices of development, such as “living well” which translates to “sumak kawsay” or “sumaq qamaña” in the Kichwa and Aymara languages from the Andes.

“This is a unique moment for the Permanent Forum, under the auspices of the Economic and Social Council, to focus on its contribution towards change. I respectfully urge that Member States work with all actors to find a common understanding,” said Vice-President of the UN General Assembly, Abulkalam Abdul Momen.

Also addressing the opening session, the President of the UN Economic, Social and Economic Council (ECOSOC), Néstor Osorio, noted the importance of indigenous knowledge and experience in ECOSOC’s annual review, which this year focuses on science, technology and innovation, and culture for sustainable development and the MDGs.

Despite centuries of genocide, language loss, discrimination and forcible removal, indigenous people remained the custodians of many of the most biologically diverse areas in the world, Mr. Osorio said. He urged the inclusion of indigenous knowledge and innovations in UN efforts “not in the form of products to be appropriated but as knowledge that leads to improved well-being for all, especially indigenous peoples themselves.”

Today’s opening ceremony in the UN General Assembly Hall began with a traditional flute song and then welcome by Todadaho Sid Hill, traditional Chief of the Onondaga Nation, part of the Six Nations or Iroquois Confederacy, which originally inhabited parts of New York. Later in his speech, Mr. Sena thanked the chief “for the welcome into their beautiful territory once again.” 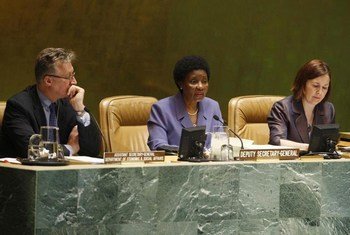 7 May 2012
Five years after the United Nations Declaration on the Rights of Indigenous Peoples was adopted, a great deal remains to be done to realize the objectives contained in that landmark document, Deputy Secretary-General Asha-Rose Migiro said today.