20 May 2013
Senior United Nations officials in Afghanistan are today urging the Government to fully implement legislation to protect women from child marriage and other forms of violence, in line with international commitments, after the Afghan Parliament failed to ratify the law over the weekend.

President Hamid Karzai passed the Elimination of Violence against Women (EVAW) law with a presidential decree in 2009, but law has yet to be ratified by the Parliament. The debate between lawmakers was halted on 18 May.

“The international community – as well as the Security Council – expects that Afghan authorities will respect and promote Afghanistan’s domestic and international obligations and legal norms in the field of human rights, notably the rights of woman children,” according to a news release jointly sent today by the UN Assistance Mission in Afghanistan (UNAMA) and UN Women in Afghanistan.

Jan Kubiš, the Secretary-General’s Special Representative for Afghanistan and UNAMA head, said the law is “critical” for all of Afghan society, “Progress in implementing the EVAW law contributes to deterring harmful practices and protecting women from violence in their daily lives.”

The UN Women representative in Afghanistan, Ingibjorg Gisladottir, urged the Afghan Government and Parliament to fully respect and defend the fundamental rights of women and girls by ensuring that the EVAW law is implemented.

“It is imperative for the development of Afghanistan that women are able to exercise their rights and be free from violence in their homes and workplaces,” Ms. Gisladottir said.

The EVAW law criminalized numerous forms of violence, including child marriage, forced marriage, the selling and buying of women for the purpose or under the pretext of marriage, the traditional practice of ba’ad which requires the giving away of a woman or a girl to settle a dispute, forced self-immolation and 17 other acts of violence including rape and physical abuse, while also specifying punishment for the perpetrators.

According to a UNAMA study released in December, there was “still a long way to go” in implementing the law due to “dramatic” under-reporting of violence and gaps in investigations as a result of cultural restraints, social norms, and taboos, as well as insecurity and weak rule of law.

In today’s statement, the UN Mission and UN Women also call on international donors to support the Government in meeting its latest commitments on gender equality, women’s empowerment and the implementation of the EVAW law by developing a joint monitoring framework with specific indicators to measure progress in these areas, with development assistance based on progress made.

The commitments were agreed to by Afghan authorities and the international community at the Tokyo conference in July 2012. 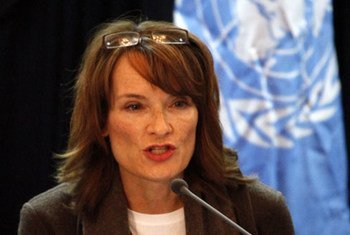 11 December 2012
Afghan women continue to be targeted by acts of gender-based violence despite specific laws designed to protect them, a new report released by the United Nations Mission in Afghanistan (UNAMA) has warned.