ESCAP
Participants at an ESCAP Roundtable in Bangkok, Thailand.
1 May 2013

Preparation, especially by investing in preparedness strategies, is essential to prevent and manage multiple shocks such as natural disasters and economic crises, experts gathered at a United Nations forum in Bangkok told participants today.

“First and foremost, Governments must invest in prevention and preparedness – it is far more effective and less costly than recovery efforts,” said the Executive Secretary of Economic and Social Commission for Asia and the Pacific (ESCAP), Noeleen Heyzer, at the Commission’s Ministerial Roundtable on Building Resilience to Natural Disasters and Major Economic Crises.

“This can be as straightforward as updating building codes and retrofitting unsafe buildings, or as far-reaching as coordinating regional monetary policies.”

Regarding economic crises, Ms. Heyzer stressed that policymakers must balance short-term stability with long-term development. “In the midst of a crisis or disaster, we can ill-afford to mechanically apply the conventional norms of macroeconomic stabilization. We need an Asia-Pacific regional framework for resilience.”

During the discussion, crisis management experts from the Association of Southeast Asian Nations (ASEAN), Indonesia, Pakistan and the Philippines agreed that countries’ resilience to natural disasters and economic crises is based on preparation, and noted the important role of regional cooperation in building this resilience.

The Asia-Pacific region has had extensive experience dealing with natural disasters. Pakistan suffered a devastating earthquake in 2005, as well as floods in 2010, local governments in the Philippines prepare and plan for cyclones every year, and countries in the region have developed warning systems to prepare for tsunamis, following the 2004 Indian Ocean tsunami which killed hundreds of thousands of people.

At the forum, Deputy Secretary-General Jan Eliasson issued an urgent call to protect the poor and vulnerable during natural disasters and economic crises. “The poorest are the most vulnerable during disasters, and we see that all over the world. We must build back better so we are better prepared for the next time.

“We definitely need to make disaster risk reduction part of the development paradigm and the post 2015 development agenda and reach out to the private sector, civil society, academia and the scientific world,” he added. 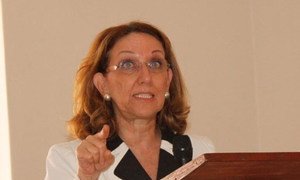 A United Nations event, organized in conjunction with the Turkish Government, today highlighted the role of innovative mobile technology in saving lives when conflicts and disasters strike.