IRIN/Kristy Siegfried
Athens residents protest the Greek government’s handling of the financial crisis during a national strike in September 2012.

1 May 2013
Greece and its international bailout lenders must adopt a human rights-based approach to economic reform, a United Nations expert reiterated today, warning that some austerity measures are undermining people’s access to jobs, health, water and energy.

“More than 10 per cent of the population in Greece now lives in extreme poverty, and unemployment amongst youth has reached an unprecedented rate of 59.3 per cent,” the UN independent expert on foreign debt and human rights, Cephas Lumina, said in a news release issues at the end of his week-long mission to the country.

In order to avoid default, Greece agreed in 2010 with the European Commission, the European Central Bank, and the International Monetary Fund to implement radical cuts in Government expenditure in return for a bailout loan, he said. Greece also adopted a structural reform programme aimed at reducing the country’s fiscal deficit and returning the economy to growth.

Yet, despite the stringent austerity measures, the Greek economy has shrunk by about 25 per cent and continues in recession. The austerity programme, he said in the news release, was being implemented in the context of a social protection system ill-equipped to absorb the shock of unemployment, salary cuts and tax increases.

Access to essential public services is likely to become even more challenging as the Government moves forward with plans to raise its coffers by privatizing State-owned assets, including water and energy. Mr. Lumina urged that “privatization should be undertaken cautiously and with sensitivity to the rights of the population.”

Prolonged unemployment is also impacting people’s access to health care, particularly among the poor and marginalized groups. “Nearly one third of the Greek population is without public health insurance,” he noted, adding that an increasing number of Greek citizens rely on free of charge volunteer clinics.

Among the negative impacts of the economic crisis is the significant increase in attacks on foreigners by extremist groups. The Government has said it took significant measures to stop hate crimes, including appointing a related Special Prosecutor in Athens, as well as some 70 anti-racist police units.

While welcoming these developments, Mr. Lumina urged authorities needed “to send a strong message that such criminal acts would not be tolerated,” by strengthening the legal and institutional framework.

Independent experts or special rapporteurs are appointed by the UN Human Rights Council to examine and report back, in an unpaid capacity, on specific human rights themes. Mr. Lumina will present his report to the Geneva-based Council in March 2014. 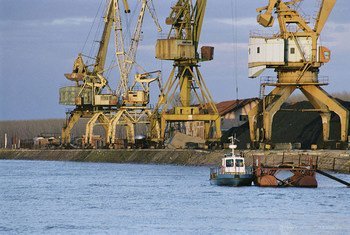 17 January 2013
The debt crisis of the Euro zone, slowing external demand and high oil process continued to depress Europe, while austerity policies throughout the industrialized world will not keep the world economy from slipping back into recession, according to an annual UN report published today.