UNOCHA/David Ohana
Taung Paw camp in Myebon, Myanmar, is cut off from any access to the outside world and security do not allow anyone to leave as a protection measure.

1 May 2013
While welcoming the most recent efforts of Myanmar’s Government to look into the sectarian violence that erupted last year in Rakhine state, a United Nations expert today stressed that much more needs to be done to end discrimination and hold perpetrators accountable for their crimes.

The Special Rapporteur on the human rights situation in Myanmar, Tomás Ojea Quintana, said that while the recommendations of the Rakhine Investigation Commission report address the humanitarian situation in the region, they still restrict the movements of the Muslim community in particular.

“The Investigation Commission’s report contains many worthwhile recommendations, which I encourage the Government of Myanmar to implement,” said Mr. Ojea Quintana after reviewing the recommendations of the 27-member Commission, set up last year by President Thein Sein in the aftermath of the violence between Buddhists and Muslims that spiked in June 2012 and then again in October.

Those recommendations included measures on addressing the dire humanitarian situation in the Muslim camps for internally displaced people (IDP), such as overcrowding, access to clean water and sanitation, the risk of disease, food security and child malnutrition, as well as on improving access to education and livelihoods.

“However, in implementing them, I urge the authorities, as a matter of urgency, to ease the harsh and disproportionate restrictions on the freedom of movement of Muslim populations in the IDP camps and also in Muslim residential areas, such as Aung Mingala in Sittwe and across northern Rakhine State, while also providing adequate security,” he said.

Those restrictions greatly exacerbated the humanitarian situation, restricting access to food, healthcare, livelihoods and education, he said, adding: “Now we are at the beginning of May and the harsh restrictions for Muslim populations remain firmly in place.” In a report to the Human Rights Council, Mr. Ojea Quintana had previously noted that the Taung Paw camp in Myebon felt more like a prison than an IDP camp.

The Special Rapporteur praised the report’s recommendations to double the presence of police, military and border security forces in Rakhine, but said accountability for human rights violations must also feature prominently in the Government’s agenda.

“I have received credible allegations that widespread and systematic human rights violations by state officials targeted against the Rohingya and wider Muslim populations have occurred and are continuing in Rakhine state. These involve the most serious of allegations, including extrajudicial killings, rape and sexual violence, arbitrary detention and torture and ill-treatment in detention, deaths in detention, and denial of due process and fair trial rights,” He said.

“The Government has an obligation under international law to investigate these allegations effectively, promptly, thoroughly and impartially and, where appropriate, to take action against those responsible, in accordance with domestic and international law,” he said, adding that accountability is an integral part of restoring relations of trust and harmony among ethnic and religious communities.

Mr. Ojea Quintana also expressed concern over the recommendation that communities should continue to be separated while emotions remain high, noting that the Government must plan for integrated communities as homes are rebuilt and people resettle to avoid permanent segregation.

“I have always said that discrimination against the Rohingya Muslims in Rakhine state is one of the underlying causes of the violent conflict between communities there,” he said. “The statelessness of the 800,000 Rohingya population underlies their marginalization and makes them particularly vulnerable to discrimination and human rights violations.” 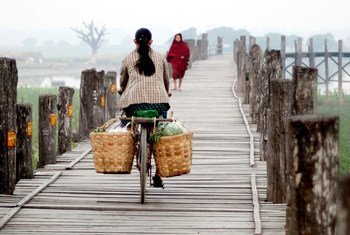 28 March 2013
An independent United Nations human rights expert today called on the Government of Myanmar to take urgent steps to tackle the prejudice and discrimination fuelling violence and destruction between Muslim and Buddhist communities.