The United Nations peacekeeping mission in South Sudan (UNMISS) today welcomed a peace deal between the Government of South Sudan and local militia groups, adding that it remained ready to assist the country as it moved forward in establishing a lasting peace.

“UNMISS stands ready to support this peaceful development, including with the demobilization of children associated with these armed groups, and assist the Government of South Sudan to achieve sustainable peace in the country,” the UN mission said in a statement which also called on all other armed groups “to lay down their weapons and join the government to build a stable and prosperous South Sudan.”

In addition, militias were ordered “to move to the areas controlled by the SPLA” in order to achieve a full cessation of hostilities.

“Because South Sudan needs development, peace and forgiveness, we have decided to end rebellion in South Sudan and ordered all rebel forces to interact with the SPLA until the integration is complete,” declared the statement issued by the groups’ spokesperson.

“From today, there will be no more war in Jonglei, Unity and Upper Nile States,” it added.

The peace deal comes on the heels of a 24 April amnesty issued by South Sudanese President Salva Kiir Mayardit as part of a wider effort in facilitating the peace.

As part of its mandated role in the country, UNMISS has also been active in consolidating peace and security, and helping to establish conditions for development in the world’s newest country since South Sudan became independent from Sudan in July 2011. 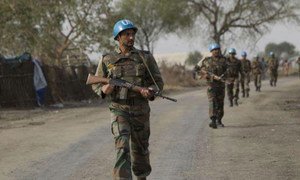 The United Nations Mission in South Sudan (UNMISS) has strongly condemned an attack that left one of its peacekeepers wounded during a patrol in the eastern state of Jonglei.