UNICEF/NYHQ2013-0167/Holt
Katy Perry shows children how to wash their hands properly, during a visit a pre-school in the village of Sahavola in Analanjirofo Region, Madagascar.

8 April 2013
United States singer and songwriter Katy Perry has teamed up with the United Nations Children’s Fund (UNICEF) to bring attention to the situation of children in Madagascar, one of the poorest countries in the world.

“In less than one week here in Madagascar, I went from crowded city slums to the most remote villages and my eyes were opened wide by the incredible need for a healthy life – nutrition, sanitation, and protection against rape and abuse – which UNICEF is stepping in to help provide,” Ms. Perry said during a visit to the tropical island country.

“I am grateful to UNICEF for giving me the opportunity to see first-hand how its programmes make a real difference in children’s lives. Support for UNICEF is saving children. I am a witness to it.”

Madagascar is still recovering from a political crisis that began in 2009, after which most international donors froze development aid to the country, forcing the Government to make drastic cuts in public spending. The cuts affected basic services such as health care and primary education.

This is Ms. Perry’s first visit in support of UNICEF, and during her time in Madagascar she saw a full range of the agency’s programmes, from education and nutrition to sanitation and hygiene.

Her trip began in a slum area of the capital Antananarivo, where she visited a child protection centre and met abused and abandoned children and young mothers receiving support and counseling. More than three out of four children in Madagascar live in extreme poverty, making them vulnerable to exploitation.

Ms. Perry also visited a pre-school and a primary school that was destroyed by a tropical cyclone. The school had been made from sticks and thatched roofing; UNICEF replaced it with a solid building.

Schooling rates in Madagascar are alarmingly low, with only three out of every 10 children completing primary school, and a majority of teachers not having completed any formal training.

UNICEF said it is working with national authorities to improve the situation through school construction, training for teachers, provision of learning materials and support for community action plans for education.

“An education is an incredible opportunity here. I visited a very remote community, where children and teachers walk for 45 minutes just to get to school. This is a testament to how appreciative they are about their education,” Ms. Perry said.

The ‘Fireworks’ singer also visited a nutrition centre in the Androranga village, where UNICEF is tackling chronic malnutrition, a serious problem in Madagascar. The centre, run by a community health worker, identifies cases and works with village mothers to improve children’s nutrition, including focusing on the importance of exclusive breastfeeding during the first six months of a child’s life. 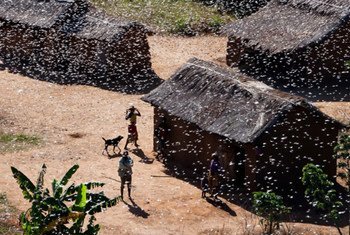 26 March 2013
Madagascar needs more than $41 million to eliminate the severe locust plague that is threatening the country’s crop production as well as the food security of more than half of the country’s population, the United Nations Food and Agriculture Organization (FAO) said today.