“The DPRK cannot go on like this way, confronting and challenging the authority of the Security Council and directly challenging the whole international community,” the Secretary-General said during a press meeting alongside Netherlands Foreign Minister Frans Timmermans at The Hague.

“I have been repeatedly urging the DPRK to refrain from taking any further provocative measures,” Mr. Ban added.

According to the semi-official South Korean news agency Yonhap, South Korean Unification Minister Ryoo Kihl-jae had said there were indications that DPRK was preparing to carry out a new nuclear test.

Such a test would be a “provocative measure” in violation of Security Council resolution 2094, Mr. Ban said.

“I sincerely hope that they will fully comply with the relevant Security Council resolutions. This is an urgent and earnest appeal from the international community, including myself,” Mr. Ban added.

The test prompted the Security Council to tighten sanctions on the country’s trade and banking, as well as travel by targeted officials. The DPRK then reportedly said it was cancelling the 1953 Armistice Agreement that ended the Korean War.

Mr. Ban is in The Hague as part of his visit to Europe. While in the Netherlands, he is taking part in the third review of the Chemical Weapons Convention at the Organisation for the Prohibition of Chemical Weapons (OPCW).

Yesterday, Mr. Ban met with Her Majesty Queen Beatrix of the Netherlands. He expressed his appreciation for the Netherlands’ important contribution to UN’s work. The two also discussed preparations for the centennial celebrations of the Peace Palace in The Hague, planned for 28 August 2013.

Mr. Ban also paid tribute to the contribution of Crown Prince Willem-Alexander and Princess Maxima in support of international development initiatives and their efforts to help achieve the Millennium Development Goals. 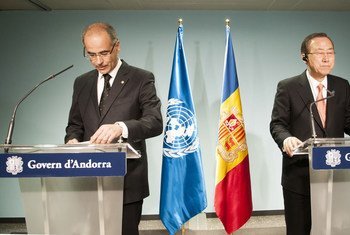 2 April 2013
Secretary-General Ban Ki-moon today stressed the current crisis on the Korean peninsula “has already gone too far,” following an announcement by the Democratic People’s Republic of Korea (DPRK) to restart its Yongbyon nuclear reactor.