8 April 2013
The United Nations Forum on Forests kicked off its tenth session today in Istanbul, Turkey, with calls for action at all levels to promote the health of a vital resource that covers nearly a third of the globe and provides an invaluable variety of social, economic and environmental benefits.

Around 1.6 billion people – including more than 2,000 indigenous cultures – depend on forests for their livelihood. Forests are also the source of three-fourths of freshwater, help to regulate the impact of storms and floods and store carbon from the atmosphere. Also, more than three billion people depend on forests for wood for cooking and heating.

“Let’s be very clear. The challenges to maintain this precious gift of nature and to manage it in a sustainable way are many and very serious,” Under-Secretary-General for Economic and Social Affairs Wu Hongbo told the opening of the session (UNFF10).

“Moreover, the services provided by forests are still taken for granted, not fully valued or captured by markets. Thus, being undervalued or not valued or all for their goods and services, forests continue to be overexploited. They continue to be cleared for agriculture and other land uses without regulation or planning, causing many adverse environmental, social and economic consequences,” he pointed out.

He added that such impacts, as evidence as shown, rarely stay within national borders and often stretch far beyond.

“To effectively address these challenges, we need concerted efforts not only at national levels but also at regional and global levels. The UN Forum on Forests provides an import value and venue for such comprehensive efforts.”

Turkish Prime Minister Recep Tayyip Erdogan underscored that the work to be done in Istanbul and the messages to be sent to the international community by the Forum will be significant in terms of building “a more livable world for all.”

He noted that the global population had reached 7 billion and there had been rapid growth in industrial zones, causing the seas to be polluted, rivers and lakes to dry out, ecosystems to deteriorate and forests to be at risk of vanishing. If growth and development continues in this way, it will have detrimental effects on the world and its inhabitants, he added.

“When all the trees are cut, when all animals are hunted, when all waters are polluted and when the air has become unbreathable, then you will understand that money is something that you cannot eat,” he said, quoting an Indian saying. “This is the disaster that we are faced with.”

He called on the session to come up with a “vision for the future” and take important steps to protect the world’s forests, which provide a range of benefits for humanity.

Established in 2000 by the UN Economic and Social Council (ECOSOC), the Forum is the only international body that addresses all forest and tree policy issues. Its current session – the first to be held outside of UN Headquarters – will consider a range of measures to improve sustainable forest management and conclude with an outcome document.

UNFF10 aims to catalyze actions to reduce deforestation; improve the livelihoods and economies of people who derive their livelihoods and sustenance from forests; increase the forests under protection; and increase assistance to developing countries to improve forest management.

“The Forum,” said ECOSOC President Néstor Osorio, “has a central role to play in the way the Council responded to the sustainable development challenge by bringing together the economic, social and environmental aspects of one of the most critical natural resources: forests.”

The UN Food and Agriculture Organization (FAO) estimates that forestry products contribute nearly $468 billion annually to the global economy, while studies being presented at UNFF10 show that we may have grossly underestimated the actual economic, social and environmental values.

The Chair of the Forum, Mario Ruales Carranza of Ecuador, said the global community has largely recognized the social, cultural and environmental functions of forests, which are home to 80 per cent of the world’s land biodiversity and form the basis for the livelihoods of 1.6 billion people.

“What is less recognized, but equally important, is that exports in the timber sector are valued at $246 billion in 2011 alone. This is but a glimpse of the true value of forests in terms of the myriad cash and non-cash contributions of forests to local, national and global economies,” he told delegates.

The current session will also showcase sustainable forest management best practices and the individuals who have actually put these practices into innovative use. It will feature the winners of the 2012-2013 Forest Heroes Award, the winners of Forests for People: the first UN International Short Film Contest, and the first ever UN Forum on Forest Photo Contest. 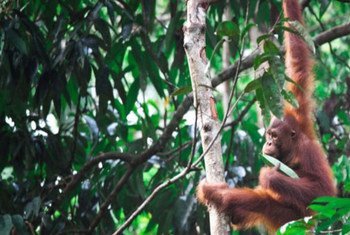 21 March 2013
Governments, businesses and civil society must commit to protect forests by reducing deforestation, preventing environmental degradation, and providing sustainable livelihoods for all of those who depend on this precious ecosystem, Secretary-General Ban Ki-moon said today.