Secretary-General Ban Ki-moon and the head of the Organization for the Prohibition of Chemical Weapons (OPCW) today voiced their deep concern about the alleged use of these deadly weapons in Syria.

The Syrian Government and the rebels reportedly traded accusations about a lethal attack in the northern province of Aleppo today, in which each side said the other had used chemical weapons.

Mr. Ban discussed the issue in a phone call with Ahmet Üzümcü, the Director General of the OPCW, which oversees the convention aiming to eliminate the use, development, production and transfer of these weapons. Syria is not a party to the convention.

According to a read-out of the conversation, Mr. Ban remains convinced that the use of chemical weapons by any party under any circumstances would constitute an outrageous crime. He also reaffirmed his strong support for the work of the OPCW, which is closely monitoring the situation on the ground.

Mr. Ban’s spokesperson Martin Nesirky said the UN is not in a position to confirm the reports of possible chemical weapons use in Syria.

“What I can say is that the Secretary-General has repeatedly said that any use of chemical weapons by any side in Syria would be a grave violation of international humanitarian law and would also be an outrageous escalation of an already bloody conflict,” he told reporters in New York.

More than 70,000 people, mostly civilians, have been killed since the uprising against President Bashar al-Assad began in March 2011. The conflict, which has now entered its third year, has also spawned a humanitarian crisis, with over three million people displaced from their homes, including one million seeking safety in neighbouring countries. 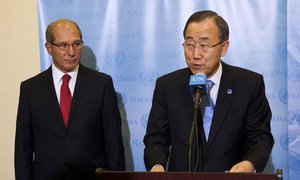 Secretary-General Ban Ki-moon today reiterated his grave concern about Syria’s chemical weapons and recent reports of plans for their possible use, and has written again to President Bashar al-Assad urging him to refrain from the use of any such weapons, according to his spokesperson.