19 March 2013
Syrian civilians are increasingly bearing the brunt of the conflict which, as it enters its third year, has led to more than 70,000 people killed and three million displaced, a senior United Nations humanitarian official has said, urging more funding for humanitarian operations.

“They have lost livelihoods and jobs, their homes, their access to food, water, fuel and health care, and they are watching the future of their children being put at risk,” Radhouane Nouicer, the Regional Humanitarian Coordinator, told journalists yesterday in Damascus.

“The country, and the interests of its future generations, has been dealt a severe blow,” he reiterated.

Since the uprising against President Bashar al-Assad began in March 2011, millions of Syrian refugees have fled their homes. According to the UN Office for the Coordination of Humanitarian Affairs (OCHA), fighting continued in the past two weeks leading to new displacements, including in Aleppo, Ar-Raqqa, Damascus, Dara’a, Homs, Idlib and Rural Damascus.

The numbers of internally displaced persons (IDPs) and those seeking refuge in neighbouring countries, including to Egypt, Iraq, Jordan, Lebanon and Turkey, continue to grow, OCHA said in its latest situation report.

The immense humanitarian crisis is not being met with adequate resources. The two UN appeals – the Syria Humanitarian Assistance Response Plan (SHARP) and the regional Refugee Response Plan (RRP) – are only around 20 per cent funded, according to OCHA.

For the SHARP, humanitarian assistance initiatives at the value of $411 million are not covered, while the refugee plan still shows that there is an $843 million funding gap up to June 2013.

Without adequate funding, the humanitarian community in Syria and the neighbouring countries would not be able reach the numbers of people planned for at the end of last year, let alone scale up further to address the growing needs.

“For this reason, relief programmes fail to feed all those who require food, fail to treat all the sick and wounded, and do not provide shelter for all the families in need,” Mr. Nouicer said.

OCHA is urging donors to give generously, and to urgently contribute the $1.5 billion pledged at the Kuwait High-Level Pledging Conference on 30 January. 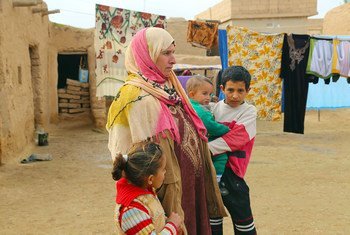 18 March 2013
Secretary-General Ban Ki-moon today stressed the urgent need for a political solution to end the crisis in Syria which over the past two years has claimed over 70,000 lives and led to a dire humanitarian crisis.