4 March 2013
The United Nations is working hard to help Japan deal with the consequences of the March 2011 nuclear power plant accident, the head of the International Atomic Energy Agency (IAEA) said today, as he presented a report in which he also voiced concern about issues relating to Iran and the Democratic People’s Republic of Korea (DPRK).

“It has been a challenging two years, especially for the people and Government of Japan, but also for the IAEA. However, the worst elements of the accident are behind us and we are now in the post-accident phase,” Director General Yukiya Amano told the Agency’s Board of Governors as it began its first meeting of the year in Vienna.

Next Monday is the second anniversary of the accident at the Fukushima Daiichi nuclear power plant, which was damaged by the earthquake and tsunami that struck Japan. The incident was reported to be the worst nuclear accident since the 1986 Chernobyl disaster.

At the Fukushima Ministerial Conference on Nuclear Safety in December, the IAEA signed a Memorandum of Cooperation with the Governor of Fukushima Prefecture by which they will work together on projects on radiation monitoring, remediation, human health, and capacity building in emergency preparedness and response.

Work has also begun on a comprehensive IAEA report on the Fukushima Daiichi accident, which the Agency hopes to finalize in 2014.

The 35-nation Board is meeting to discuss the IAEA’s work on nuclear verification, safety, security and the peaceful use of nuclear technologies.

Mr. Amano reported that the Agency continues to verify the non-diversion of nuclear material declared by Iran under its Safeguards Agreement.

“However, Iran is not providing the necessary cooperation to enable us to provide credible assurance about the absence of undeclared nuclear material and activities. The Agency therefore cannot conclude that all nuclear material in Iran is in peaceful activities,” he stated.

Iran’s nuclear programme – which its officials have stated is for peaceful purposes, but some other countries contend is driven by military ambitions – has been a matter of international concern since the discovery in 2003 that the country had concealed its nuclear activities for 18 years in breach of its obligations under the Nuclear Non-Proliferation Treaty.

Mr. Amano noted that the Agency and Iran have had three rounds of talks since November 2012. “However, it has not been possible to reach agreement,” he said, adding that access to the Parchin site for verification has not been granted.

“I am therefore, once again, unable to report any progress on the clarification of outstanding issues, including those relating to possible military dimensions to Iran’s nuclear programme,” he said.

The Director General requested Iran once again to provide access to the Parchin site without further delay, saying that doing so would be “a positive step” which would help to demonstrate Iran’s willingness to engage with the Agency on the substance of its concerns.

Mr. Amano also voiced deep regret at the announcement by DPRK on 12 February that it had conducted a third test of a nuclear weapon, despite calls from the international community not to do so.

“I reiterate my call for the DPRK to fully comply with the NPT and to cooperate promptly and fully with the Agency. The IAEA remains ready to contribute to the peaceful resolution of this issue by resuming its nuclear verification activities once political agreement is reached among the countries concerned,” he stated. 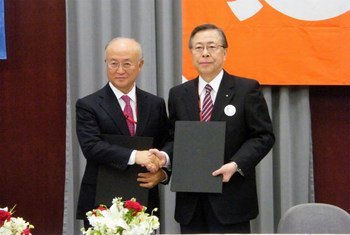 17 December 2012
An agreement between the United Nations International Atomic Energy Agency (IAEA) and administrators from Japan’s Fukushima prefecture was signed over the weekend, ushering in a new era of emergency preparedness and radiation monitoring for the beleaguered Japanese prefecture.