4 March 2013
Almost 3,000 live great apes are stolen annually from the forests of Africa and South-east Asia in an illicit trade increasingly linked to organized crime and trans-boundary networks that move the animals in the same ways as drugs, arms and laundered money, according to a new United Nations report released today.

“Stolen Apes: The Illicit Trade in Chimpanzees, Gorillas, Bonobos and Orangutans,” produced by the UN Environment Programme (UNEP) through the Great Apes Survival Partnership (GRASP), estimates that at least 22,218 great apes have been lost from the wild since 2005 – either sold, killed during the hunt, or dying in captivity – with chimpanzees comprising 64 per cent of that number.

“The current scale outlined in this report underlines how important it is that the international community and the organizations responsible for conserving endangered species remain vigilant, keeping a step ahead of those seeking to profit from such illegal activities,” UNEP Executive Director Achim Steiner said in a press release.

The report shows that the cause of this illegal trade shifted from traditional conservation threats such as deforestation, mining and bush-meat hunting, to a more sophisticated business driven by demand from international markets.

According to figures cited in the report, a poacher may sell a live chimpanzee for $50, whereas the middleman will resell that same chimpanzee at a mark-up of as much as 400 per cent. Orangutans can fetch $1,000 at re-sale, and gorillas illegally sold to a zoo in Malaysia in 2002 reportedly went for $400,000 each.

“It is important to establish baseline figures for the illegal trade in great apes, even if these numbers only hint at the devastation,” said the coordinator of GRASP, Doug Cress.

“Great apes are extremely important for the health of forests in Africa and Asia, and even the loss of 10 or 20 at a time can have a deep impact on biodiversity.”

The UN General Assembly declared the period 2011-2020 as the UN Decade on Biodiversity to promote the implementation of a strategic plan on biodiversity and its overall vision of preserving and properly managing the different types of animals and plants.

The loss of natural habitats further drives the illegal trade, pitting people against the animals, according to the report. Great ape habitat is being lost at the rate of 2-5 per cent annually. By 2030, less than 10 per cent of the current range will remain on current trends.

Among its recommendations, the report urges increased enforcement of protected areas, to both reduce illegal trade in great apes and to protect their habitat.

According to the report, law enforcement for crimes related to illicit great ape trade is lagging.

Only 27 arrests were made in Africa and Asia in connection with great ape trade between 2005 and 2011, and one-fourth of the arrests were never prosecuted.

“Stolen Apes” is the first report to analyze the scale and scope of the illegal trade and highlight the growing links to sophisticated trans-boundary crime networks, which law enforcement networks are struggling to contain.

Its release today coincides with the conference of the UN-backed Convention on International Trade in Endangered Species of Wild Fauna and Flora (CITES) now underway in Bangkok, Thailand. 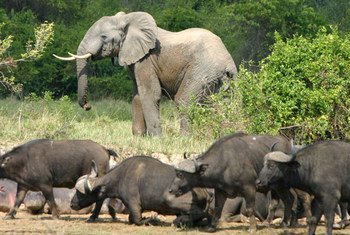 3 March 2013
Some 2,000 representatives from 150 governments, indigenous groups, businesses and civil society today gathered at a United Nations-backed conference in Bangkok, Thailand, which aims to find ways to stop wildlife poaching and illegal trading.