17 December 2012
An agreement between the United Nations International Atomic Energy Agency (IAEA) and administrators from Japan’s Fukushima prefecture was signed over the weekend, ushering in a new era of emergency preparedness and radiation monitoring for the beleaguered Japanese prefecture.

The Memorandum of Cooperation – signed on the sidelines of the three-day Fukushima Ministerial Conference on Nuclear Safety, held in the city of Koriyama, Japan – will help promote cooperation between the IAEA and local bodies for radiation monitoring and remediation as well as human health issues in the wake of the devastating nuclear accident which afflicted the region over one year ago.

In a statement marking the agreement, the UN nuclear watchdog’s Director-General, Yukiya Amano, acknowledged the importance of the IAEA’s role in alleviating the consequences of the Fukushima nuclear disaster.

“The IAEA has expertise in the areas of remediation and decontamination, as well as environmental monitoring and human heath,” Mr. Amano said. “It is our hope that we will support Fukushima and at the same time serve as a bridge connecting the Prefecture and the world.”

In March 2011, Japan was struck by an earthquake and tsunami that killed more than 20,000 people in the eastern part of the country. In addition to causing widespread destruction, the tsunami also slammed into the Fukushima Daiichi nuclear power station, located in Fukushima, disabling cooling systems and leading to fuel meltdowns in three of the six units.

The accident, which was reported to be the worst nuclear accident since the 1986 Chernobyl disaster, shook the nuclear industry, regulators and governments; and weaknesses in the design and various oversights in the power station were later identified, which could have diminished the damage. Since then, the Japanese Government has significantly increased its efforts to improve its early warning systems and nuclear safety measures.

According to the Memorandum, an IAEA Response and Assistance Network Capacity Building Centre will be designated, with IAEA radiation monitoring equipment to be deployed in case of need, and to provide training in emergency preparedness and response in Japan and the Asia Pacific region.

“I’m very much encouraged by the conclusion of this Memorandum and I believe this will serve to promote reconstruction in Fukushima,” said the Governor of Fukushima Prefecture, Yuhei Soto, who was also present at the signing, according to an IAEA news release.

“We will also be able to disseminate to the rest of the world the knowledge and experience to be gained from the activities that we are conducting, and we hope this will be a symbol of Fukushima,” he added. 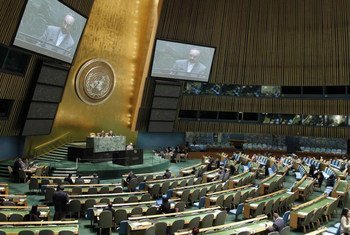 5 November 2012
A year after reporting on the devastation caused by the Fukushima Daiichi nuclear accident in Japan, the head of the United Nations International Atomic Energy Agency (IAEA) told the world body’s Member States today that nuclear power is safer than before the disaster.