26 February 2013
The world’s youth must take the helm in steering the international community through its turbulent period of economic and political transition and towards a more “prosperous, equitable and peaceful future,” Secretary-General Ban Ki-moon urged today, adding that the United Nations was increasing its focus on global youth action to support this cause.

Speaking at a youth event at the Fifth Global Forum of the UN Alliance of Civilizations, in Vienna, Austria, Mr. Ban told delegates representing “the largest generation of young people the world has ever known” that the world was waiting for their contribution on a host of urgent issues.

“I am here today to ask you to help show us the way. The world is going through a period of transition – economic, demographic, political and environmental,” Mr. Ban said in his remarks, stating that although the challenges are profound, “so are the opportunities.”

Mr. Ban underscored the UN agenda for “deepening” its youth focus in programmes related to employment and entrepreneurship, political inclusion and human rights, and education and reproductive health, noting that the world body’s “top priority” was to work with young people “to enhance your lives, the well-being of your communities, and the state of the world.”

“You have already demonstrated that you are willing and able to take on the responsibility of leadership. The world will rely on you to speak the language of tolerance and respect. Your voices need to drown out those that preach division and hatred,” continued Mr. Ban.

“The world will rely on your courage and principled actions to lead us on the path of harmony and sustainable development.”

The Secretary-General drew particular attention to a $1.5 million contribution announced by the Government of Germany to support a trust fund set up by UN Volunteers and the UN Development Programme (UNDP) to boost youth volunteerism and “harness the energy of young people around the world to bring about transformational change in their communities.”

“I hope your presence at this Forum will inspire other countries to follow suit and invest in the future by investing in young people today,” he said.

Launched in 2005 through the initiative of Spain and Turkey, and under the auspices of the UN, the Alliance seeks to promote better cross-cultural relations worldwide. The Fifth Global Forum officially opens tomorrow and brings together decision-makers, experts, and a variety of stakeholders in the field of intercultural and interreligious dialogue from all over the world. The two-day forum will focus on the theme “Responsible Leadership in Diversity and Dialogue.”

Also today in Vienna, Mr. Ban held a meeting with Austrian President Heinz Fischer. They discussed a range of issues, including the situations in Syria, Mali, and the Sahel, and the Secretary-General expressed his gratitude for Austria’s contribution to the UN, notably to its peacekeeping operations, including in the Middle East.

He also spoke by telephone with the President-elect of Cyprus, Nicos Anastasiades, and wished him every success in addressing the significant economic challenges facing his country. Mr. Ban also expressed the hope that full-fledged negotiations to achieve a comprehensive settlement for the reunification of Cyprus would resume as quickly as possible and reiterated the UN’s readiness to support the process, according to the Secretary-General’s spokesperson. 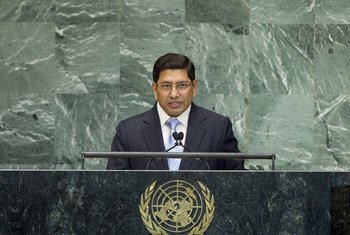 28 September 2012
Highlighting the vital role of the United Nations in promoting growth for the most disadvantaged people on earth, Nepal’s Deputy Prime Minister Narayan Kaji Shrestha took to the podium of the General Assembly today to call for steps to make the world body stronger and more efficient.