27 September 2014
United Nations Deputy Secretary-General Jan Eliasson today reminded the annual meeting of the Alliance of Civilizations designed to promote better cross-cultural relations that “people are very good at seeing prejudice in others – but they are not so good at seeing their own bias.”

He went on to say “if you start to divide people into us and them, you put a stamp of quality on yourself vis-à-vis others. In the ‘us-and-them’ syndrome, the ‘us’ is practically always qualitatively higher than the ‘them’. And then you build up biases which can lead to horrible things, as we’ve seen far too often.”

Saying that “the majority of the world’s citizens are far from extreme,” he said, “we must try to reach out to young people. We need to amplify these voices of these moderate forces, both Muslim, Christian, Buddhist, Hindu, Jewish and other faith communities.”

Mr. Eliasson reminded the meeting that “two days ago, at the General Assembly, the Secretary-General spoke out against the rise of divisive politics, as you may recall. He made the point that people are very good at seeing prejudice in others – but they are not so good at seeing their own bias.”

Nassir Abdulaziz Al-Nasser, the High Representative of the Alliance of Civilizations, launched in 2005 through the initiative, of Spain and Turkey under the auspices of the UN to seek better cross-cultural relations worldwide, told the meeting: “We need to unite and reject any suggestion of a clash of civilizations.”

“Belief in permanent religious war is the misguided refuge of extremists who cannot build or create anything, and therefore peddle only fanaticism and hate,” he said. “And it is no exaggeration to say that humanity's future depends on us uniting against those who would divide us along fault lines of tribe or sect; race or religion.”

The High Representative said he will ensure that the concrete suggestions from the meeting today will be built upon through consultations to make them a reality. 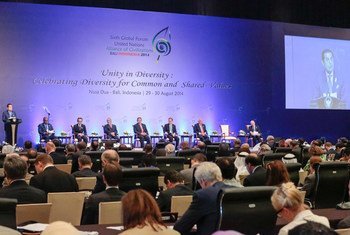 29 August 2014
United Nations officials today highlighted the important role played by the initiative known as the Alliance of Civilizations in building bridges to peace, especially amid the current instability in many parts of the world, as they kicked off a global forum in Bali, Indonesia.