Highlighting the vital role of the United Nations in promoting growth for the most disadvantaged people on earth, Nepal’s Deputy Prime Minister Narayan Kaji Shrestha took to the podium of the General Assembly today to call for steps to make the world body stronger and more efficient.

“Rising challenges does not mean that the role of the UN has diminished, rather it demands a more effective and strong United Nations Organization,” Deputy Prime Minister Shrestha told the 67th Assembly on the fourth day of its annual General Debate, at UN Headquarters in New York.

“We have to internalize this reality and move ahead, grasping the true spirit of its founding principles and purposes,” he said, noting the “laudable role” the United Nations has played in setting universal norms and values, maintaining peace and security, promoting human rights and fundamental freedoms, advancing multilateralism and forging a global agenda for social and economic development.

“Timely and continued reforms in the UN are necessary to strengthen and revitalize this world body to respond to the increasing global challenges,” he added.

As have other national representatives in their speeches to the General Debate, the Deputy Prime Minister called for the Assembly to be endowed with power and authority for decision-making that is commensurate to its global representation, and for the 15-member Security Council to be reformed and expanded while its working methods should provide greater transparency.

In his statement, he also about the UN’s “central role” in promoting a development agenda which takes into account the special needs and development challenges confronting the least developed countries (LDCs) and landlocked developing countries, as well as other vulnerable groups of countries.

“The LDCs are suffering from dehumanizing marginalization and deprivation from basic necessities of life,” the Deputy Prime Minister added. “This state of affairs is a blemish in the sheer affluence achieved by the globalized world.”

Global sustainable development would not be possible without sustainable development for the LDCs, including substantial improvement in the quality of their 880 million people, he stressed, while also declaring that, “the world must pay due attention in words as well as in deeds to the special and differential needs and requirements of the LDCs.”

Turning to internal matters, the Nepalese official said that his country still had to adopt a long-awaited constitution, noting that the Constitutional Assembly set up after the formal end in 2007 of more than a decade of civil war, had expired in May without doing so. But he said qualitative progress has been made completing all outstanding issues.

The Deputy Prime Minister is one scores of heads of State and government and other high-level officials who are presenting their views and comments on issues of individual national and international relevance at the Assembly’s General Debate, which ends on 1 October. 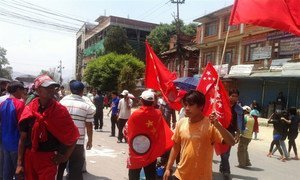 Secretary-General Ban Ki-moon today voiced disappointment that Nepal's Constituent Assembly has expired without the adoption of a long-awaited constitution, and called on all parties to work together in the national interest to ensure that the achievements of the past several years are not lost.