UNICEF/Asselin
Collecting water at a pump in the Zanzan Region of Côte d’Ivoire.

“The future development agenda must aim at tackling the most persistent of all challenges: inequalities in access to essential services to realize people’s rights,” the UN Children’s Fund (UNICEF), the UN Entity for Gender Equality and the Empowerment of Women (UN Women), the Special Rapporteur on the human rights to safe drinking water and sanitation, the Government of Finland and Water Aid, said in a joint press release.

“Crucially, among these essential services, it must aim for every person to have equal access to water, sanitation and hygiene. Special attention should be given to women and girls, who are disproportionately affected by the lack of these services.”

The group stated that countries must build on the lessons learned working towards the anti-poverty targets known as the Millennium Development Goals (MDGs), which are set to expire in 2015. The eight MDGs set specific targets on poverty alleviation, education, gender equality, child and maternal health, environmental stability, HIV/AIDS reduction, and a ‘Global Partnership for Development.’

“On the eve of the consultations on the post-2015 development agenda, we believe that the world must achieve and build on the MDGs, but must also craft even more ambitious goals. The goals must create incentives for change – a change that will reach every single woman, man, boy and girl,” it said.

The group also noted that States have a responsibility to respond to the millions of people who are marginalized on a daily basis and do not have access to basic services.

“We must have a world that recognizes and responds to the millions and millions who for too long have remained hidden within aggregate statistics that mask the reality of life without safe drinking-water and sanitation: children, women, people with disabilities and those living in remote areas and urban slums.

“The post-2015 agenda must not move forward without clear objectives towards the elimination of discrimination and inequalities in access to water, sanitation and hygiene.” 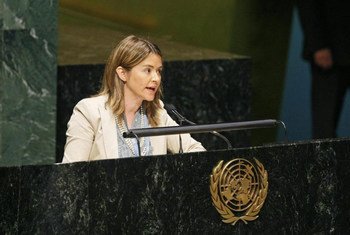 8 February 2013
Thailand must step up its efforts to ensure all their citizens have access to water and sanitation, an independent United Nations expert said today, noting that there is currently a stark contrast between populations who are able to enjoy this basic need, and those who do not.