6 June 2012
A United Nations independent expert today called on governments to “fully support” the right to drinking water and sanitation at the United Nations Conference on Sustainable Development (Rio+20) in Brazil later this month.

In an open letter to States negotiating the outcome document of Rio+20, the UN Special Rapporteur on the human right to safe drinking water and sanitation, Catarina de Albuquerque, expressed concern that a clear recognition of the human right to water and sanitation is at risk of being suppressed from the document after three rounds of negotiations in New York over the past three months.

“Some States suggested alternative language that does not explicitly refer to the human right to water and sanitation,” Ms. de Albuquerque said in a news release. “Some tried to reinterpret or even dilute the content of this human right.”

She noted that the right to water and sanitation has been recognized as a human right under international law, including by the General Assembly and the Human Rights Council in 2010.

More than 100 world leaders, along with thousands of parliamentarians, mayors, UN officials, Chief Executive Officers and civil society leaders will come together at Rio+20, in Rio de Janeiro from 20 to 22 June, seeking to renew commitments to find solutions to the world’s most pressing social, economic and environmental challenges, including access to water and sanitation.

Negotiators concluded the last round of Rio+20 preparatory talks – focussed on the upcoming event’s outcome document – in New York last Saturday, and they have reached agreement on more than 20 per cent of the document, with many additional paragraphs close to agreement. The next and final preparatory talks will be held in Rio de Janeiro from 13 to 15 June.

Ms. de Albuquerque emphasized that Governments need to set a target for water and sanitation for all, without discrimination, to protect the health and dignity in particular of marginalized populations. 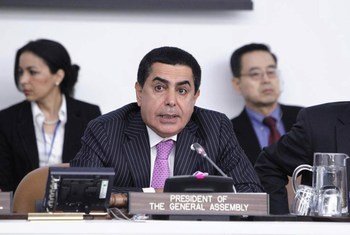 22 May 2012
United Nations top officials today stressed the need to achieve concrete commitments ahead of the Sustainable Development Conference (Rio+20) in Brazil, and called on countries to make progress in the last round of negotiations before the Conference starts next month.