UN kicks off ‘Year of Quinoa’ with focus on world nutrition

Top officials from the United Nations and the Andean community of Bolivia, Colombia, Ecuador and Peru today launched the ‘International Year of Quinoa’ to raise awareness of the nutritional, economic, environmental and cultural value of a food that has been traditionally cultivated for thousands of years.

“I hope this International Year will be a catalyst for learning about the potential of quinoa for food and nutrition security, for reducing poverty – especially among the world’s small farmers – and for environmentally sustainable agriculture,” Secretary-General Ban Ki-moon said at the launch at UN Headquarters.

Calling it “extraordinary” and a “cultural anchor” in the Andes, Mr. Ban noted that quinoa contains all the essential amino acids, trace elements and vitamins, but no gluten.

The small crop is widely adaptable, thriving in temperatures ranging from -8 degrees Celsius to 38 degrees Celsius, at sea level or 4,000 meters above, and is not impacted by low moisture.

This versatility makes quinoa a viable food option for areas with arid farming conditions and high malnutrition rates. FAO estimates that 1 billion people were affected by malnutrition in 2010, nearly all living in the developing world.

Reducing world hunger by half is one of the Millennium Development Goals (MDGs), the globally-agreed anti-poverty targets with a deadline of 2015.

“Many nations in South America are making strong progress toward meeting the Millennium Development Goal,” Mr. Ban said, including by increasing food production, reducing poverty and increasing access to nutritious food like quinoa.

Bolivia and Peru account for more than half of the annual 70,000 tons of quinoa produced, according to the Food and Agriculture Organization (FAO). While its cultivation is expanding to include Kenya, India, North America and Europe, most of the crop is farmed through traditional means in the Andean altiplano.

In 2011 the General Assembly adopted a resolution honouring quinoa with its own year. In doing so, the 193-member body sought to recognize the Andean indigenous people “who have managed to preserve quinoa in its natural state as food for present and future generations, through ancestral practices of living in harmony with nature.” The theme for this year is “a future sown thousands of years ago.”

Bolivian President Evo Morales Ayma, a former farmer himself, told the launch that the world today “discovered the real value of quinoa,” which stands in sharp contrast to the colonial disrespect for the food and traditional ways of indigenous lives.

He also noted that since gaining popularity, quinoa’s price rose on the world market and it is becoming a more attractive crop for large companies which are keen to change the traditional methods by which it is cultivated and cropped.

Mr. Morales has been named Special Ambassador to FAO for the International Year of Quinoa, along with the First Lady of Peru, Heredia Humala, who advocates for better nutrition for mothers and children.

“That is why the Government of Bolivia is supplying quinoa as part of a nutritional supplement programme to pregnant and nursing women, and Peru is incorporating quinoa in school breakfasts,” Mr. Ban noted, commending the efforts of Mr. Morales and Ms. Humala.

Mr. Ban added that quinoa holds the promise of improved income for small-scale farmers, a key plan of his Zero Hunger Challenge which aims to provide adequate nutrition to every person. Its five objectives are to make sure that everyone in the world has access to enough nutritious food all year long; to end childhood stunting; to build sustainable food systems; to double the productivity and income of smallholder farmers, especially women; and to prevent food from being lost or wasted.

In a meeting with President Morales on the sidelines of the launch, Mr. Ban applauded Bolivia’s initiative in pushing for quinoa’s distinction in 2013. They discussed the nutritional qualities and adaptability of the crop, as well as Bolivia’s difficulties in absorbing its international popularity.

Mr. Ban also noted Bolivia’s readmission to the Single Convention on Narcotic Drugs, and the two men discussed the importance of reaching a binding agreement on climate change by 2015.

♦ Receive daily updates directly in your inbox - Subscribe here to a topic.
♦ Download the UN News app for your iOS or Android devices.
quinoa 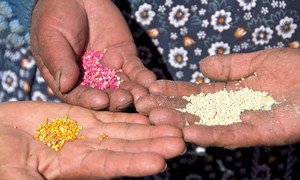 Quinoa, a highly nutritious grain-like crop that has made its entry into the food basket of culinary connoisseurs has been a staple for centuries in South America, among pre-Columbian Andean farming communities from Colombia to Ecuador. In fact, most of the world's quinoa is grown on the altiplano, a vast, cold, windswept, and barren 14,000-foot Andean plateau spanning parts of Peru and Bolivia.