Claudio Guzmán/FAO
Quinoa farmed on the Bolivian antiplano ranges in colour from white to pink to orange.
20 February 2013

Quinoa, a highly nutritious grain-like crop that has made its entry into the food basket of culinary connoisseurs has been a staple for centuries in South America, among pre-Columbian Andean farming communities from Colombia to Ecuador. In fact, most of the world's quinoa is grown on the altiplano, a vast, cold, windswept, and barren 14,000-foot Andean plateau spanning parts of Peru and Bolivia.

In 2012, President Evo Morales of Bolivia was appointed Special Ambassador for the International Year of Quinoa by the Food and Agricultural Organization (FAO). Quinoa was thrust into the UN limelight by President Morales, himself a former quinoa farmer. Mr. Morales is in New York to launch the Year along with the First Lady of Peru, Nadine Heredia, who promotes the traditional Andean diet to combat infant malnutrition.

By declaring 2013 the ‘International Year of Quinoa’, the United Nations is hoping to popularize a life-sustaining seed that could help promote food security and poverty eradication, cut malnutrition and boost biodiversity in support of the achievement of the Millennium Development Goals. It is also a way to recognize the indigenous peoples who preserved quinoa through traditional knowledge and practices passed down through the ages.

“We want the world to get to know it,” said Alan Bojanic, Deputy Regional Representative at the FAO Regional Latin America and the Caribbean Office, admitting that some people question the decision to give quinoa its own year. 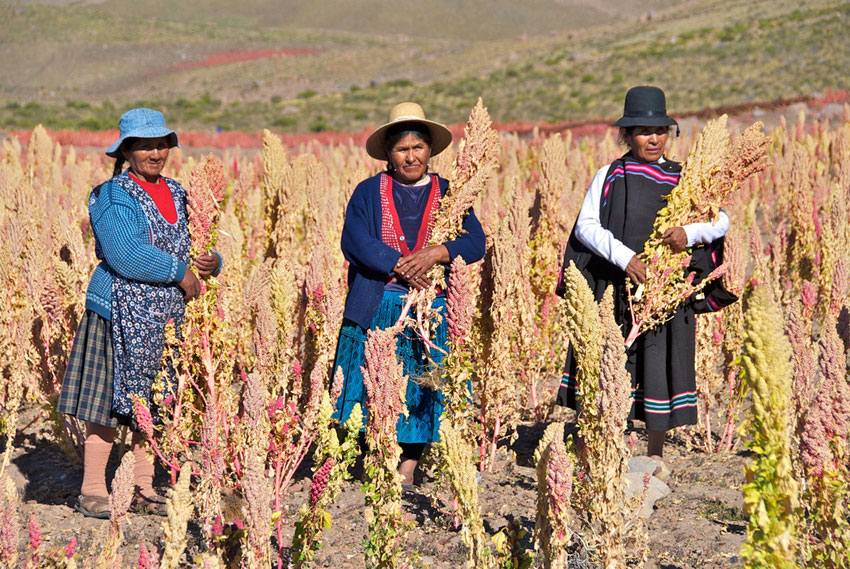 In Resolution 66/221, the General Assembly declared the International Year of Quinoa in recognition of the Andean indigenous people “who have managed to preserve quinoa in its natural state as food for present and future generations, through ancestral practices of living in harmony with nature.” Hence the theme for this year: “A future sown thousands of years ago.”

Pronounced ‘keen-wah’, quinoa is not really a grain, not really a vegetable. It is a pseudo-cereal, part of the chenopodium family related to beets and spinach. Quinoa seeds are gluten-free and have all the essential amino acids, trace elements and vitamins needed to survive. Due to its high nutritional value, indigenous peoples and researchers call it “the golden grain of the Andes.”

Cautioning that the crop is “still in the experimental phase” in some areas, Mr. Bojanic, who also serves as the Secretary for the International Year of Quinoa’s Secretariat, said that quinoa “is beginning to be taken up by countries that would not have thought of having it a few years ago.” Those include Canada, China, Denmark, Italy, India, Kenya, Morocco and the Netherlands, which are already producing or undertaking agronomic trials towards commercial production of quinoa.

Bolivia and Peru account for more than half of the annual 70,000 tons produced of quinoa, with the United States responsible for about 7,000 tons and France close behind, FAO reports. Quinoa is hardy. It thrives in temperatures from -8 degrees Celsius to 38 degrees Celsius, at sea level or 4,000 metres above, and is not impacted by droughts or poor soils.

“This crop can be grown under very difficult conditions like semi-arid, at high altitudes, sea level, with no fertilizer. It’s an amazing crop in terms of the adaptability that it has to stressful environments,” Mr. Bojanic said. 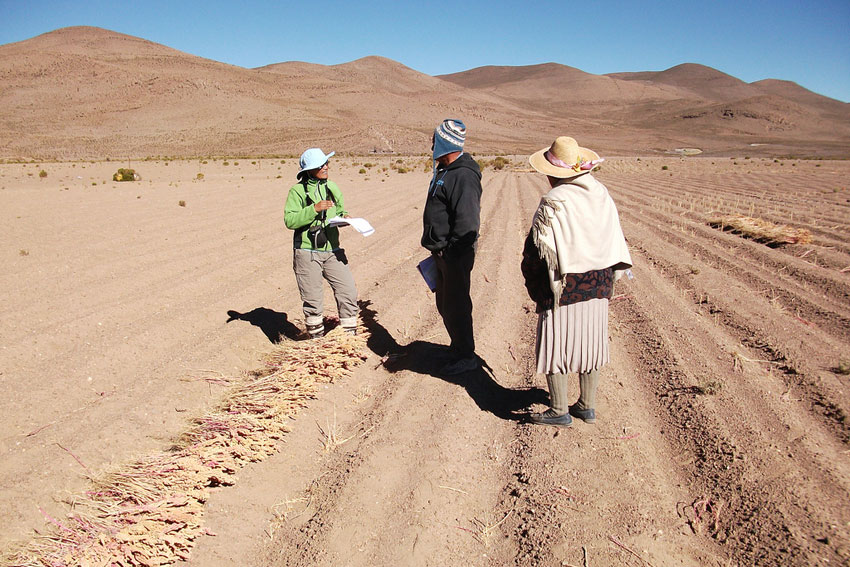 This adaptability makes quinoa potentially viable for areas with regular droughts, such as the Sahel Region – which includes Senegal, Chad, Niger and Mauritania - where million of people are in need of emergency food aid and malnutrition is rampant.

The latest figures in FAO’s State of Food Insecurity in the World 2012 Report show that despite significant progress, almost 870 million people - or one in eight - are still suffering from chronic malnutrition.

UN officials say there is still time to reach the Millennium Development Goal for reducing the proportion of hungry people around the world by half by 2015, but countries need to step up their efforts and quinoa offers hope.

Agronomical and nutritional attributes aside, quinoa’s global success relies on making it affordable. Consumers will not buy what they cannot afford, and farmers will not grow large quantities of a crop that is not financially viable.

Such is the so-called quinoa quandary that as the demand for quinoa has grown in recent years, so has its price. Less than $70 per ton a decade ago, quinoa now sells for more than $2,000, according to FAO figures.

In Bolivia, quinoa farmers near Lake Titicaca, the world’s highest body of water, carry waist-high stalks covered with purple, yellow, green and orange flowers to harvest. This is considered the cradle of great civilizations for the Tiahuanaco and the Incas, and is the origin of quinoa.

“Now people everywhere are buying quinoa. In La Paz, they sell it in the markets. It’s everywhere. For that reason we are also able to sell small quantities. With that money we sustain our families,” Elias Vargas, a farmer, told the United Nations.

Mr. Vargas and his neighbours sell their crops to a Bolivian coffee chain, Alexander Coffee, which uses quinoa in its salads, sandwiches and desserts. The company bakery turns out more than 1,000 quinoa chocolate chip cookies per day.

“In the beginning it was hard to change the mentality,” recalled Pamy Quezada Velez, CEO of Alexander Coffee. Quinoa used to be known as ‘poor man’s food’ with Bolivians preferring to eat wheat and rice. “More people are opening up to the idea, and we’re doing well with quinoa.”

The partnership between small farmers and small businesses is part of a project supported by the UN’s International Fund for Agricultural Development (IFAD). While farmers like Mr. Vargas do not grow enough to sell to foreign markets, increased domestic consumption provides them with new opportunities.

Almost all of the estimated 250,000 acres of quinoa farmland is in the hands of small farmers and associations around the world. FAO estimates that at least 130,000 small quinoa growers from South America alone will benefit this year from increased sales, higher prices for their crops and a return to indigenous practices in a sustainable manner.

“In the traditional markets, it is still rather accessible to poor people but when you find it in the supermarket it tends to be rather expensive,” Mr. Bojanic said.

The rapid expansion of quinoa farming in the last years has been a double-edged sword.

As prices rise, farmers are more likely to sell the quinoa crops they would have consumed, sparking concerns of malnutrition. About one-third of children under the age of five in the Andean countries are already chronically malnourished, according to figures from the World Health Organization (WHO). 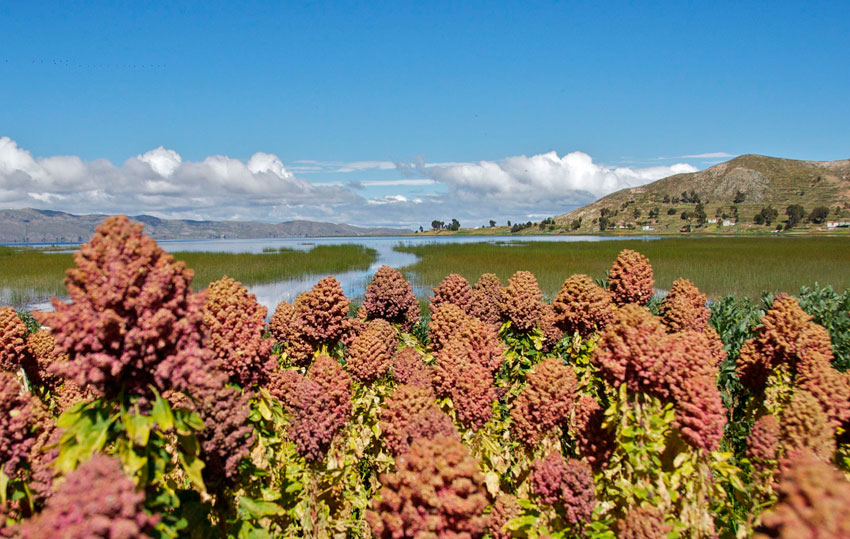 The change in food choices as a result of higher income is also causing some farmers to turn from traditional staples to more caloric, processed foods. The change is particular among youth who would prefer a sugary soda to a home-made drink of boiled water, sugar and quinoa flour.

In addition, the increased incentives to produce more quinoa are also contributing to land disputes. “Land that had barely any use in the past and small farmers who were not in conflict are starting to – now that the land has more value - struggle among themselves so they can claim such lands to produce quinoa,” Mr. Bojanic said.

Property disputes are further aggravated by reverse migration, as the high prices for quinoa are motivating residents who moved to cities to return to plots, and by not giving the soil enough time to rest between harvests.

The push for increased production is seemingly at odds with the traditional life of the quinoa farmers, a main reason quinoa was selected for the honour. But UN officials stress that boosting the importance of developing sustainable production systems for quinoa consumption and food security are among the main objectives for the year.

The International Year of Quinoa, is overseen by the IYQ- International Coordination Committee composed of the ministries of agriculture of Andean countries and France. Bolivia has the presidency of the Committee, with Ecuador, Peru and Chile sharing the vice-presidency.

“The reaction is very enthusiastic,” said Mr. Bojanic. “Governments are looking at a coordinated approach to increase production nationally and regionally.” 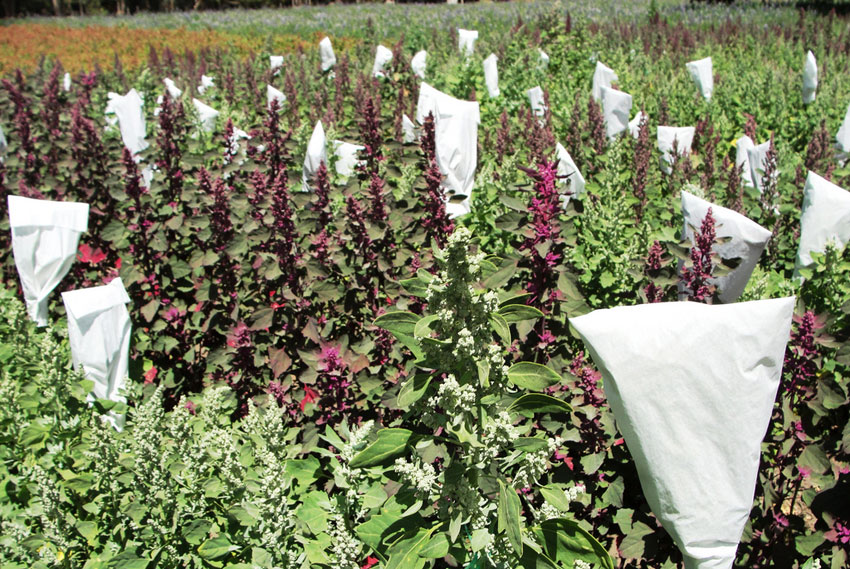 In the public sector, the UN is looking to engage with international agricultural research centres and national research centres on a global research network and gene bank database to maintain the crop’s 120 variations. The idea is that experts will test the crops and show farmers how they can best be grown under different conditions.

Professor Luz Gomez Pando is one of the local experts and scholars working with the UN in Lima, Peru. Based at La Molina University, she uses nuclear radiation to develop new varieties of quinoa that have a higher yield. The gamma rays speed up the evolution process that would take millions of years in nature. She then gives her seeds to the women farmers and at harvest time, cooks quinoa with them.

“I am from the highland above 3,000 metres and I was the daughter of two farmers,” Ms. Gomez told UN Radio and the International Atomic Energy Agency (IAEA). “What we need right now is to have these crops very fast in big fields.”

The majority of quinoa is produced using traditional technologies that result in low yields. A hectare normally results in 600 kg of quinoa. FAO wants to raise the production to a ton of quinoa per hectare. That would help raise the overall production from 70,000 tons per year to 200,000 tones annually by 2018 through improved technologies and engagement with businesses already processing quinoa, including large importers and exporters. 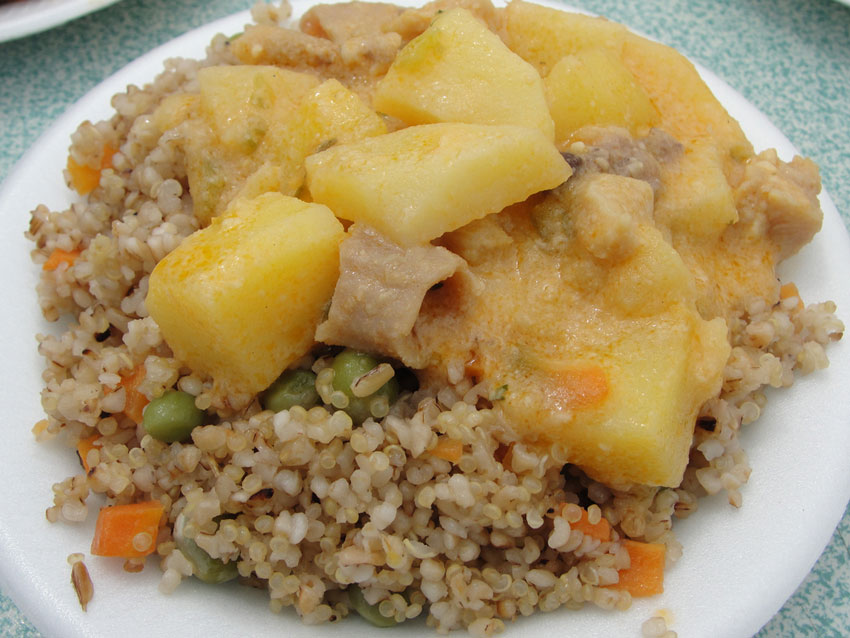 “Companies that deal with quinoa in Bolivia are beginning to transform the quinoa into different products and export them, and we’re starting to better understand and study the potential of this food. And also identify which varieties are good for what,” said Wilfredo Rojas.

In addition to the pure quinoa, there is a world of by-products related to quinoa seeds, ranging from organic bread and spaghetti to vodka and cosmetics.

The increasing products are reaching new consumers, a trend the International Committee for Quinoa wants to continue. It plans to pack this year with food fairs, recipe books, cook-offs and cultural events to bolster quinoa’s standing in the gastronomic world.

“We should all try it. It is important for the value it represents to your own health. It is very easy to cook it. It has a nice taste. There is a lot of room for imagination,” Mr. Bojanic said.

Nutrition and food security should be the top development goal as the international community sets its priorities beyond 2015, the target date for a achieving the globally agreed anti-poverty targets known as the Millennium Development Goals (MDGs), senior United Nations officials have stressed.