20 February 2013
A year after the international community launched a massive humanitarian response to the food crisis affecting Africa’s Sahel region, millions of people there are still affected by drought and require assistance, according to the United Nations World Food Programme (WFP).

Ms. Cousin was the host of a high-level event in Rome bringing together leaders of humanitarian agencies, government representatives from affected countries and major donors to review the effectiveness of the assistance provided to the region.

Last year the international community helped to avert a humanitarian catastrophe by providing $1.2 billion in assistance to around 10 million people across eight countries in the Sahel, noted a news release issued by WFP.

“However, millions of people in the region are still affected by drought, with close to 1.5 million children under the age of five at risk of severe acute malnutrition,” said the agency.

Ms. Cousin emphasized that boosting food security and building resilience lies at the heart of the collective efforts to change the pattern of recurring drought and continue on the path towards a better future.

WFP says that crop prospects are currently encouraging, but there is a high risk of future shocks, due to increased rates of poverty and undernourishment, extreme weather, environmental degradation, low investment in agriculture, high prices and vulnerability to market volatility.

Also, the conflict in Mali has triggered widespread displacement in the region, uprooting half a million people and placing pressure on communities still recovering from drought.

The western part of the Sahel region, which stretches from the Atlantic Ocean to the Red Sea, and includes Chad, Mali, Mauritania, Niger, and parts of Sudan, Cameroon and Nigeria, is facing a swathe of problems, which are not only political but also involve security, humanitarian resilience and human rights.

Last September, Secretary-General Ban Ki-moon appointed former Italian prime minister Romano Prodi as his Special Envoy for the Sahel and tasked him with shaping and mobilizing an effective UN and international response to the multiple crises facing the region.

“The focus of the United Nations strategy for the Sahel is on the people of the region, to help them address the root causes of instability, with special emphasis on marginalized communities,” said Mr. Prodi. “My role is to bring the best minds and all the resources possible around key long-term development issues that critically affect the peoples of the region.”

Today’s event also featured a short documentary film, “The Human Chain,” which chronicles the humanitarian response to last year’s Sahel crisis, illustrates various forms of assistance – including cash and vouchers, special nutrition programmes to prevent severe cases of malnutrition as well as support for smallholder farmers to improve their self-reliance in the face of difficult climatic and economic conditions.

UN kicks off ‘Year of Quinoa’ with focus on world nutrition 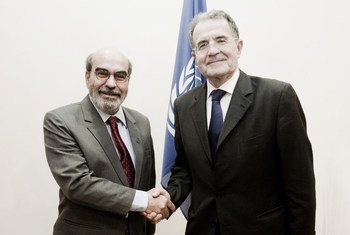 7 December 2012
Food insecurity in Africa’s volatile Sahel region is closely linked to peace and stability there, the head of the United Nations Food and Agriculture Organization (FAO) warned today, adding that short-term humanitarian efforts in the Sahel needed to be replaced with longer-term development.