New report released by UNODC and the Afghan Government shows that since 2009 progress has been made in reducing corruption in the public sector. UNODC image

7 February 2013
The total cost of corruption in Afghanistan has significantly increased over the past three years to $3.9 billion, according to a United Nations survey released today, which says that in spite of fewer people paying bribes, the practice is still having detrimental effects due to its frequency.

In 2012, half of Afghan citizens paid a bribe while requesting a public service and nearly 30 per cent of them paid a bribe for a private sector service, states the survey on trends and patterns of corruption produced by the High Office for Oversight and Anticorruption and the UN Office on Drugs and Crime (UNODC).

While these figures are high, there is evidence of progress, as 59 per cent of the adult population had to pay at least one bribe to a public official in 2009. However, the frequency of bribery has increased from 4.7 bribes to 5.6 bribes per bribe-payer and the average cost of a bribe has risen from $158 to $214, a 29 per cent increase in real terms.

“The bribes that Afghan citizens paid in 2012 equals double Afghanistan’s domestic revenue or one fourth of the Tokyo pledge,” said the UNODC Regional Representative, Jean Luc Lemahieu, referring to the international donors’ conference held in Japan in July, in which $16 billion was pledged for Afghanistan’s economic development in the next four years on the condition that the Government reduce corruption before receiving all of the money.

“Nobody doubts the seriousness of the issue, the art is to design the correct strategy to remedy the situation,” said Mr. Lemahieu.

While corruption is seen by most Afghans as one of the most urgent challenges facing their country, it seems to be increasingly embedded in social practices, with patronage and bribery being an acceptable part of day-to-day life.

The survey, which was based on a sample of 6,700 Afghan citizens over the age of 18 across the country, stated that 68 per cent of those interviewed considered it acceptable for a civil servant to top up a low salary by accepting small bribes from service users. Similarly, 67 per cent of citizens considered it sometimes acceptable for a civil servant to be recruited on the basis of family ties and friendship networks.

In most cases, bribes are paid to obtain better or faster services, while in others bribes are offered to influence deliberations and actions such as police activities and judicial decisions, thereby eroding the rule of law and trust in institutions.

In particular, the survey points to the education sector as one of the most vulnerable to corruption, with the percentage of those paying a bribe to a teacher jumping from 16 per cent in 2009 to 51 per cent in 2012.

“Afghans know that corruption is eating at the fabric of their society,” said Mr. Lemahieu. “The solution is not only to be found within the Government but also within the wider community.” 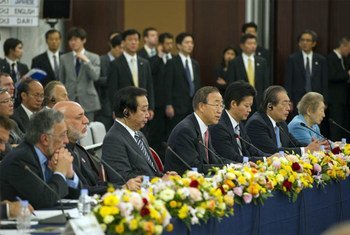 8 July 2012
Speaking at a major conference, Secretary-General Ban Ki-moon today called for the international community to continue its engagement with and support for Afghanistan.