8 July 2012
Speaking at a major conference, Secretary-General Ban Ki-moon today called for the international community to continue its engagement with and support for Afghanistan.

Speaking at a major international conference, Secretary-General Ban Ki-moon today called for the international community to continue its engagement with and support for Afghanistan.

“We must all continue to stand with the people of Afghanistan in their quest for security, stability and prosperity. An Afghanistan at peace with itself would at long last respond to its peoples' hopes of better lives for themselves and their children,” Mr. Ban said at the Tokyo Conference on Afghanistan.

“And an Afghanistan living in harmony with its neighbours, near and far, would make a tremendous contribution to regional and international peace and security,” he added.

Hosted by the Government of Japan, the Tokyo Conference on Afghanistan drew representatives from 70 countries – including Afghan President Hamid Karzai – and international organizations to the Japanese capital on Sunday to chart future assistance for Afghanistan, ahead of the withdrawal of foreign combat troops by the end of 2014. The gathering was the third international conference on the Central Asian nation in three months.

In his remarks to the event, the Secretary-General said that the world had reached a critical moment in Afghanistan's history, with a transition from reliance on aid that has enabled the country's institutions to take root, to a normalized relationship of a sovereign, functioning Afghanistan with its people and with its international partners.

“But let us be clear: transition must not translate into short-term measures only. We should give the people of Afghanistan the long-term prospect of a better future, and ease their worries that Afghanistan may be abandoned,” Mr. Ban said.

He added, “We are all aware of serious concerns regarding Afghan delivery and accountability on governance commitments. These must be addressed in the interest of the Afghan people and also to maintain donor confidence – but we must be fully conscious that Afghanistan's institutions are still in their nascent stages.”

Mr. Ban welcomed the establishment of a so-called Tokyo Mutual Accountability Framework – which sets out the principles of the partnership between the international community and Afghanistan – as a means of providing confidence to Afghans and international donors that the commitments they have made to each other will be monitored and honoured.

“Donors should live up to the commitments they have made to provide predictable assistance in a way that genuinely strengthens national ownership and capacity,” the UN chief said. “At the same time, it is of course Afghanistan itself that bears the primary responsibility to live up to its obligations to better serve its people in line with the commitments made in Bonn, Kabul and London.”

“In close coordination with the major stakeholders and within the limits of our limited resources, we will do our utmost to help the Afghans fill the gaps that may arise as transition deepens,” he said. “That means strong support, throughout the Transformation Decade, for the country's economic and social development, for building its institutional capacity, for basic services and social protection, for jobs, justice and the rule of law.”

The United Nations Assistance Mission in Afghanistan (UNAMA) has been in the Central Asian nation since 2002, at the request of the Government, to assist in the laying the foundations for sustainable peace and development. In March this year, the Security Council renewed UNAMA's mandate until March 2013.

At the same time, the Security Council reaffirmed that UNAMA, under the direction of the Secretary-General's Special Representative, Ján Kubiš, would continue to play a pro-active role in promoting peace and stability in Afghanistan by leading the efforts of the international community, regional cooperation and the work of all United Nations agencies, funds and programmes. 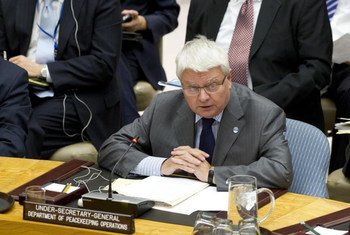 27 June 2012
Long-term support for Afghanistan’s socio-economic development is vital as the country proceeds on its path towards assuming full responsibility for its security, governance and development, top United Nations officials told the Security Council today.