UNESCO/Lazare Eloundou Assomo; Ministère de la culture du Mali/DNPC
The door of the Sidi Yahia Mosque in Timbuktu, Mali, before and after it was attacked.

30 January 2013
The United Nations Educational, Scientific and Cultural Organization (UNESCO) today announced it will help rebuild and safeguard Mali’s cultural heritage, which has been the target of attacks during the current crisis.

The United Nations Educational, Scientific and Cultural Organization (UNESCO) today announced it will help rebuild and safeguard Mali’s cultural heritage, which has been the target of attacks during the current crisis.

“This heritage is an integral part of the dignity and identity of its people,” said UNESCO Director-General Irina Bokova, “and it is our responsibility to restore it.”

According to media reports, Islamist extremists set fire to a library in the city of Timbuktu containing thousands of historic manuscripts, many of them dating back to the 13th to 16th centuries. The manuscripts deal with subjects ranging from religious studies to mathematics, medicine, astronomy, music, literature, poetry, architecture and women’s and children’s rights.

The latest attacks on the West African country’s cultural heritage follow the destruction of at least three mausoleums last month.

“I am deeply distressed by the wanton destruction of Mali’s heritage that the world has witnessed in recent months,” Ms. Bokova said. “UNESCO will spare no effort in working with the people of Mali to recover what is rightfully theirs. We will help them rebuild the mausoleums of Timbuktu and the tomb of Askia in Gao.”

Ms. Bokova stressed that UNESCO would mobilize the expertise and resources to help the Malian people safeguard and preserve the ancient manuscripts that “testify to the region’s glorious past as a major centre of Islamic learning.”

UNESCO will send a team of experts to Mali to assess the damage and determine the most urgent tasks as soon as security conditions allow it, Ms. Bokova said. A special working group will also be established to draw up an action plan to guide reconstruction activities in the medium and long term.

Ms. Bokova also called on the leaders of Mali’s neighbouring countries, institutional partners including the International Police (Interpol), and all those involved with the art market, to mobilize against all attempts to smuggle manuscripts or other cultural artifacts out of the country.

“These treasures are extremely valuable and vulnerable. We must act quickly,” she said, adding that UNESCO will boost efforts to accelerate the digitization of both private and public collections.

Fighting between Government forces and Tuareg rebels broke out in northern Mali last January, after which radical Islamists seized control of the area. The renewed clashes in the north, as well as the proliferation of armed groups in the region, drought and political instability in the wake of a military coup d'état in March have uprooted hundreds of thousands of civilians. 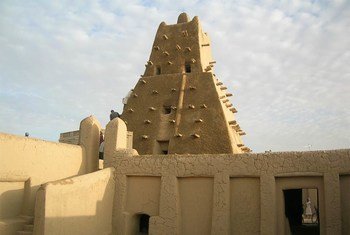 25 December 2012
The head of the United Nations Educational, Scientific and Cultural Organization (UNESCO) has called on the international community to act urgently to protect Mali's cultural heritage after the latest wave of destruction at Timbuktu.