25 January 2013
The ongoing crisis in Mali is having far-reaching effects in West Africa and the Sahel, a United Nations envoy said today, stressing that the situation there illustrated the fragility of the region.

“As developments unfold in Mali, the risks for infiltration and destabilization are real in some of the countries bordering Mali, as illustrated by the efforts of neighbouring countries to tighten security along the borders,” the Secretary-General’s Special Representative for West Africa, Said Djinnit, told the Security Council in a briefing today.

Mr. Djinnit, who heads the UN Office for West Africa (UNOWA), said the situation in Mali has heightened the overall terrorism threat in the subregion, adding that the international community must remain mindful of the limitations faced by Mali’s neighbours, and enhance support in the areas of border control and counter-terrorism, among others.

Fighting between Government forces and Tuareg rebels broke out in northern Mali last January, after which radical Islamists seized control of the area. The renewed clashes in the north, as well as the proliferation of armed groups in the region, drought and political instability in the wake of a military coup d'état in March have uprooted hundreds of thousands of civilians.

According to the latest estimates by the UN High Commissioner for Refugees (UNHCR), more than 150,000 people have fled to neighbouring Mauritania, Niger and Burkina Faso, while an additional 230,000 have been internally displaced.

The conflict has strained resources and worsened the humanitarian situation in the Sahel, which was already precarious due to years of drought, piracy, and transnational organized crime. It also prompted the Malian Government to request military assistance from France to stop the progression of extremist groups.

In addition, the Council last month authorized the deployment of an African-led International Support Mission in Mali, known as AFISMA, for an initial period of one year to assist the authorities in recovering rebel-held regions in the north and restoring the unity of the country.

Mr. Djinnit, who in recent months has travelled to Mali, Burkina Faso, Nigeria and Côte d’Ivoire supporting mediation efforts by the Economic Community of West African States (ECOWAS), stressed that the international community must simultaneously support both the political and military tracks to ensure a successful transition process.

“It will also be necessary to eventually pursue a broad reconciliation process that strengthens the foundations for national cohesion in Mali,” Mr. Djinnit said. “The recently deployed UN Team in Bamako will be fully available to support this process, and I will personally continue to support these efforts.”

He also noted that beyond the crises in Mali and the Sahel, the region continues to be threatened by piracy and armed robbery at sea in the Gulf of Guinea, disrupting maritime trade roots and economic progress in the region. Tensions along the borders between Liberia and Côte d’Ivoire, and transnational organized crime in Guinea-Bissau and Mali are also a source of concern.

UNOWA is engaging with governments as well as civil society organizations in the region and other partners to address these issues, Mr. Djinnit said, welcoming the progress made so far.

“The situation in West Africa remains at a crossroads. On the one hand, the leaders of the region have made significant progress towards the promotion and consolidation of peace, and are taking decisive efforts to address the pressing challenges to peace and security in the region,” he stated.

“On the other hand, the situation in Mali and in the Sahel, combined with other cross-cutting threats in the region, including drug trafficking and piracy, has the potential to undermine security in West Africa, while the root causes of instability in the region are yet to be fully addressed,” he added.

The envoy stressed that continued attention and support of the international community, in particular the Security Council, to ECOWAS leaders and countries remains essential towards lasting peace, stability and development. 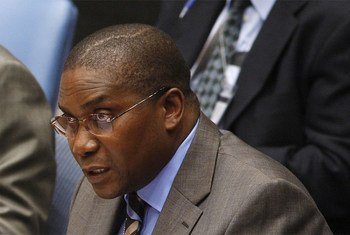 18 January 2013
A United Nations team is set to arrive in the Malian capital of Bamako tomorrow to support the national authorities in their quest to restore constitutional order and territorial integrity.