The United Nations refugee agency today called for international action to stop forced disappearances from camps in eastern Sudan that house Eritrean refugees, who may be held for ransom or trafficked for the purpose of forced marriage, sexual exploitation or bonded labour.

“Over the last two years we have seen people disappearing from the Shagarab camps – some of them kidnapped, and others believed paying to be smuggled elsewhere,” Melissa Fleming, spokesperson for the UN High Commissioner for Refugees (UNHCR), said at a briefing in Geneva.

“UNHCR calls on all national and international actors to step up efforts to counter criminal groups seeking to exploit refugees and asylum-seekers and to reduce the risks of kidnapping, smuggling and trafficking of people,” she said.

Ms. Fleming said that the agency’s Sudan office reported 619 people having left the camps over the past two years, with 551 of them having done so in 2012, in addition to unconfirmed cases. The number of voluntary versus forced departures is difficult to ascertain, however, she warned.

In the latest incidents, four refugee women were reportedly kidnapped from the Shagarab camps during the night and early morning of 22 January. Refugees in the camp, which hosts 29,445 people, had also reported the kidnapping of a refugee man the previous week.

In anger at these incidents, some refugees attacked members of one of the local tribes who they thought were responsible, and the ensuing violence left several injured among the host population and the refugees. Calm has since been restored.

Based on numerous reports and individual interviews, Ms. Fleming said she was able to state that the main actors responsible for smuggling and human trafficking from eastern Sudan into Egypt are local tribesmen in eastern Sudan and in the Sinai, as well as some criminal gangs.

She said that UNHCR is working with the Sudanese authorities, the International Organization for Migration and other humanitarian agencies to reduce the risk of abductions and kidnappings in the area.

“The Government of Sudan has already deployed additional police and we are supporting the authorities to improve overall security, including with the construction and rehabilitation of police stations, provision of vehicles and communication equipment,” she said.

“UNHCR is also assisting the refugees in the Shagarab camps with setting up a community-based policing system to reduce security risks,” she added, reporting that the agency is also providing psycho-social counselling to survivors of trafficking as well as legal aid to those in detention.

UNHCR said that tens of thousands of Eritreans have been living as refugees in eastern Sudan for generations, while every month, some 2,000 asylum-seekers reach the Shagarab camps alone. Some come to escape military conscription, while others are motivated by a possibility of a better life elsewhere, according to the agency.

♦ Receive daily updates directly in your inbox - Subscribe here to a topic.
♦ Download the UN News app for your iOS or Android devices.
Sudan|refugee 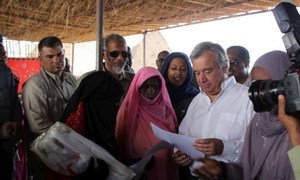 The head of the United Nations refugee agency has praised efforts to find a lasting solution for tens of thousands of long-term refugees in eastern Sudan, most of them Eritreans, but voiced concern over the vulnerability of the younger ones to human trafficking.